SOUTHWARK ODD JOBS: THE RISE OF THE MACHINES

The pioneering professor who creates ‘robot detectives’ in his Borough lab 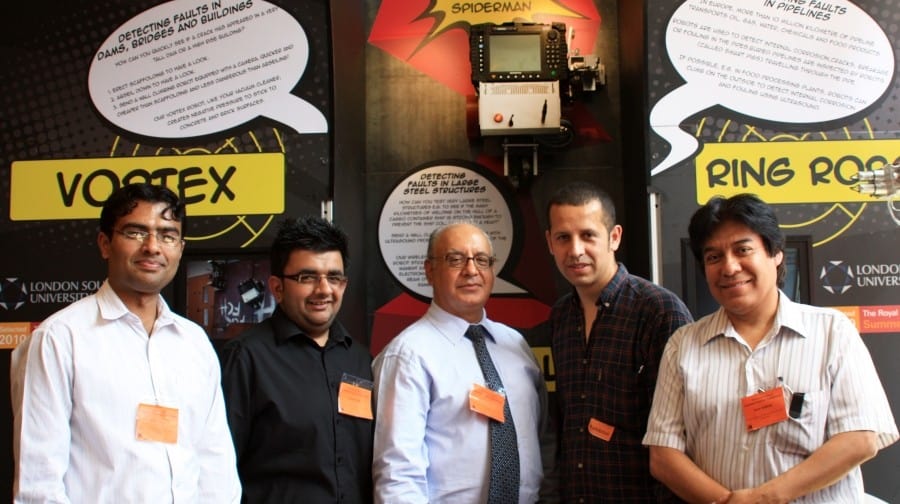 Dr Tariq Sattar and his team who build 'robot detectives'

BEING A robo-prof for over twenty years has led Dr Tariq Sattar to the cheerful conclusion that machines will inevitably invade every aspect of our lives and possibly wipe out the human race for good.

He stands surrounded by relics of the robot-past in his award-winning London South Bank University (LSBU) lab in Elephant and Castle, like the first android to ‘walk’ up walls, developed in Russia in the ‘90s.

Since then, Dr Sattar, 65, has dedicated his working life to building machines to reach the places humans can’t – like inside nuclear reactors. The ‘robot detectives’ as the good doctor calls them, can move independently up vertical walls, through vast oil pipes and around Sellafield’s storage tanks to find defects which could lead to a nuclear catastrophe if left untended.

The brave bots become dangerously radioactive once lowered into the disused Uranium and can never see the light of day again, condemned to an eternity roaming the walls of the concrete containers.

“They are not animals or humans,” says Dr Sattar, who has no emotional attachment to the artificial intelligence he has created.

His protégé, Omar Howlader, 26, who is currently building a bot for his PhD, said: “The emotional attachment is there but something you have created is being used for a service.”

Each machine can take between two and four years and tens of thousands of pounds to develop, but they all start from humble beginnings. Motors and remote controls can be bought from hobbyist suppliers online, meaning Dr Sattar can build a basic wall-walking robot for £500. “That’s fun. I like to build something quickly and mess about with it.”

Earlier models designed by Dr Sattar to inspect ships’ hulls, off shore oil platforms and airplane panels, used pneumatic suction pumps to stick to the surfaces they inspected. But he is most proud of his later work using magnetisation and air pressure to allow wireless machines to move freely around any environment. “We were pioneers. Nobody had built something like this previously. I’m proud of the fact we’ve managed to create this impact.”

Of his inventions, Dr Sattar’s favourite is the catchily named, FSPO, an amphibious robot which swims in water, powered by two thrusters. “It’s something we’d never done before – how to make it swim around and land on the floor – it was quite an exciting project.”

The machines Dr Sattar designs could save lives – it’s a dangerous job, trying to inspect the hull of a ship in the North Sea and sometimes workers die on duty. “We are about preserving life and preserving structures,” says Dr Sattar proudly.

But the future relationship between humans and machines may not be so rosy. As we continue to create artificial intelligence to be smarter than we are, it won’t be long until your vacuum cleaner could be networked to the internet and beat you at a game of chess, according to Sattar, or just sit around playing online scrabble instead of cleaning the floors.

The day all the machines we use to manage our lives are networked together, could be the Terminator-style judgment day for the human race, according to Dr Sattar. “Everything will be controlled by computers; you could crash aircraft with that network of machines. If they decide they don’t want humans they could just get rid of us.”

Vortex the robot can climb up glass walls

CROCELLS the robot can cling to any surface

RIMINI the robot can swim underwater

Southwark NewsNewsSOUTHWARK ODD JOBS: THE RISE OF THE MACHINES