“The whole of north Southwark is being carved up by Southwark Council for developers," campaigner said 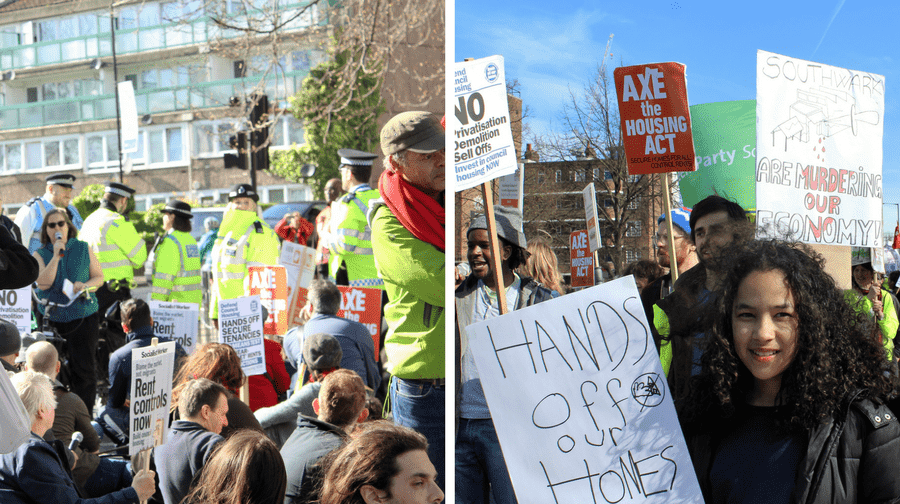 Campaigners marched across Southwark on Saturday calling for council homes to be protected from demolition, Becky Morton writes…

Traffic was halted as marchers walked from Canada Water Library, along Old Kent Road and ended with a sit-down protest on the Aylesbury Estate.

Julie Phipps, from Rotherhithe, told the News she was marching against the demolition of council housing and soaring rents. She said: “Why should we be priced out of the area? My daughter has had to move out of Southwark because she can’t afford to live here. Council homes are being replaced with unaffordable housing and the people that were born here can’t afford to live here anymore.”

Jerry Flynn, of the 35% campaign, told the march: “The whole of north Southwark is being carved up by Southwark Council for developers. We are being told all the time that what we are going to get in return is new homes and new communities. We are not getting any of those things. The affordable housing there is, is not affordable.”

Cllr Mark Williams, Southwark Council’s cabinet member for regeneration and new homes, said: “With one of the largest stocks of council housing in the country, plus our promise to building 11,000 more new council homes and millions of pounds invested into making thousands of our homes warm, dry and safe we think we have shown time and again our commitment to the future of council homes in Southwark.

“We disagree that the best way to do this is to place residents on estates that are well past their prime and buildings that have reached the end of their life. We want to create mixed communities living in top quality accommodation with the best services such as new libraries, community halls and medical centres on their doorstep.”