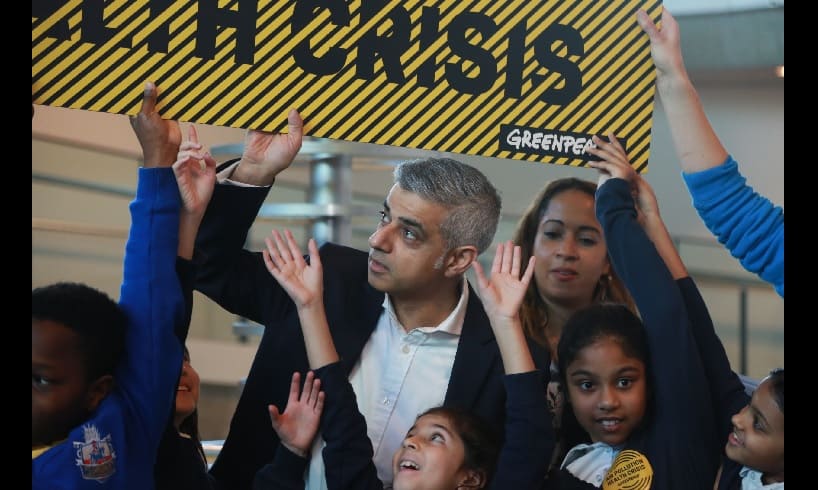 The Mayor of London has been called upon by six Southwark schools to clean up the “shameful” air quality in the city, writes Kirsty Purnell…

They are among over one hundred London headteachers who have signed a letter, coordinated by Greenpeace, in which he is asked to take steps to protect youngsters from pollution.

In the letter, schools ask him to extend the Ultra-Low Emission Zone (ULEZ) beyond Central London and to put shorter, more immediate measures in place, such as making walking and cycling to school safer and easier

Of 443 London schools which are over the legal limit for Nitrogen Dioxide (NO2) – a pollutant from diesel vehicles – 55 are in Southwark. 45 are primary schools and 10 are secondary schools.

Children from London schools deliver a letter to London Mayor, Sadiq Khan, asking for him to tackle air pollution crisis.

St George’s Cathedral Catholic Primary School on Westminster Bridge Road has the highest level of NO2 in Southwark.

At the event, Khan announced £250,000 funding for “air quality” audits on 50 primary schools in areas which have above-legal levels of NO2.

The audits will highlight ways to dramatically lower emissions and suggest key interventions to reduce exposure.

Sadiq Khan said: ‘Every child deserves the right to breathe clean air in London and it is a shameful fact that more than 360 of our primary schools are in areas breaching legal pollution limits.”

“Alongside my plans to bring forward the Ultra-Low Emission Zone, and extend it along some of our busiest roads, plus new charges for the dirtiest vehicles and greener bus fleets – these measures will start to deliver real change in the long term. Now it is time for government to get a grip on air quality and match my ambition.”