Some Southwark schools could lose the equivalent of six teachers to funding cuts, headteacher warns

Some schools in the borough are expected to lose more than £300,000 from their budgets per year over the next two years 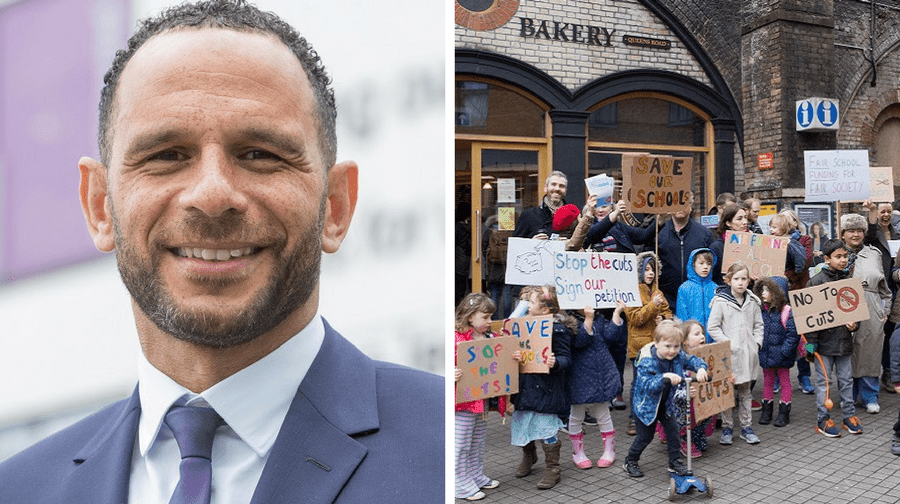 Matt Jones, principal of Ark Globe Academy, (left), and parents and children take part in a day of action, (right)

Some schools in Southwark could lose out on funding worth the equivalent of six teachers over the next two years, a headteacher has warned.

Schools in the borough are expected to lose up to three per cent – more than £300,000 in some cases – of their budgets per year over the next two years as part of Government cuts.

Matt Jones, chair of Southwark Association of Secondary Headteachers (SASH) and principal of Ark Globe Academy, said the loss of more than £300,000 in some schools was the equivalent of potentially six full-time teachers.

They believe loss of funding would mean cuts to the after-school clubs, cultural visits, well-being and counselling services, and careers advice they currently provide.

“Those are the very real things that will be cut,” said Mr Jones. ”The Government is asking us to do additional things  – i.e. wellbeing and mental health are big on the DfE’s agenda, as is careers advice – but they are asking us to do more with less.

“A lot of the youth services locally have been cut so our after-school clubs keep our young children off the street and safe.

“It is potentially exposing more of our students to risk of knife crime because they won’t be in an after-school club – they will be on the streets.

“These clubs are free to the students. They are onsite and accessible; the students don’t have to travel anywhere.”

Catherine May, head at St Saviour’s and St Olave’s School, said: “One of the great strengths of secondary schools in Southwark is our diversity.

“We provide genuine choice to parents within our community, and are each able to provide a range of support services and cultural experiences for our students that enable them to thrive.

“The cuts in funding will inevitably lead to the loss of these essential services and destroy the distinctiveness of our schools.”

“Southwark is one of the highest-performing boroughs in the country, in terms of GCSE results,” Mr Jones added. “This is not by accident.”

“Yet the very initiatives in our schools which support such high outcomes are all at risk of being cut if the funding formula is approved in its current form.”

A change.org petition has been set up by Southwark Parents Against Cuts to Education (SPACE) which has already attracted more than 300 signatures and which will be sent to the Education Secretary.

The Government’s second consultation on the proposed changes ends at 5pm on March 22.

To have your say, visit: www.consult.education.gov.uk/funding-policy-unit/schools-national-funding-formula2/