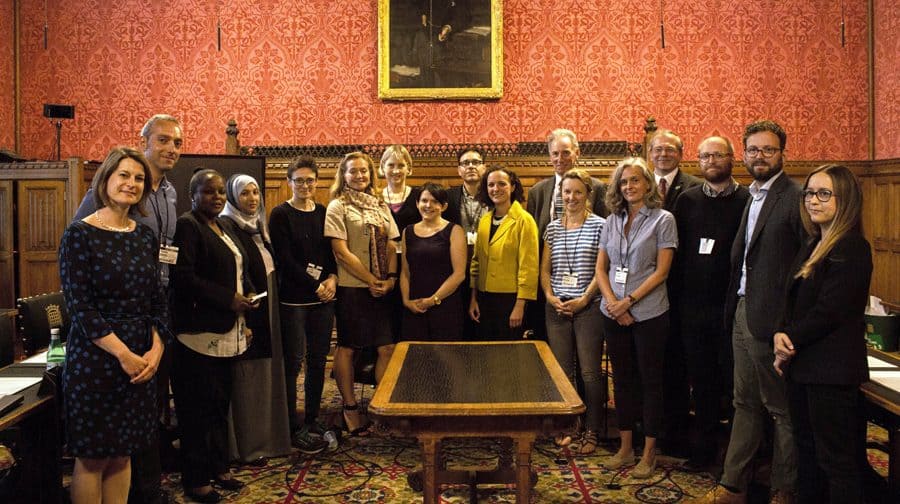 Helen Hayes MP, far left, with members of the group

The cleaner air for Southwark schools group’s second meeting was held on Tuesday, June 5, at the Houses of Parliament and organised by Councillor Richard Livingstone, cabinet member for environment, transport management and air quality.

The network, consisting of eleven Southwark schools, were invited by Helen Hayes who highlighted the importance of pulling together to combat the problem, which has affected Southwark schools in the past, in an investigation previously reported by Southwark News last year.

The Greenpeace investigation found children at a number of Southwark nurseries are at risk of being exposed to illegal levels of air pollution from diesel vehicles.

The investigation revealed  in April last year the dangerous levels of nitrogen dioxide (NO2) near 44 nurseries and pre-schools in the borough.

The environmental organisation’s analysis of Government data showed Southwark, as a local authority, ranked the fifth highest in London for the number of nurseries within 150 metres of a road breaching the legal NO2 limit.

The Dulwich and West Norwood MP explained how she believed that stopping engine idling and introducing a vehicle scrappage scheme would overall help to improve air quality, and further encouraged members to work alongside other local action groups to help bring about change at both a local and national level.

Amy Foster, from Bessemer Grange Primary School, talked about her school’s annual bike trip held every May, in which the children head to Dulwich Park to practise and learn with the Cycle Confident team.

She also explained how the school close the road outside the entrance once a month on a Friday in order to create a safe play-street outside for the children to play in. Like Ms Hayes, Amy was very passionate about tackling and improving air quality and road safety.

Kimberly Hickman, from Goose Green School, praised the role that parents, local businesses, the council, local MPs and many others have played in securing funding and installing green screens around the school.

Goose Green Primary has also introduced an ‘eco warrior scheme’ for the children as well as a gardening club, with the aim of working towards achieving even better air quality.

Speaking after the event, Cllr Livingstone said: “We heard inspiring stories about some of the excellent work that is happening in Southwark’s schools to improve air quality for children in the borough.

“It was great to see that schools want to pull together and help one another and I look forward to supporting their efforts.

“I would encourage all Southwark schools to sign up and come along to future meetings.”

If your school would liked to be involved in the future, please contact Signe Norberg at Signe.Norberg@southwark.gov.uk