'I was heartbroken; I thought ‘I don’t believe it, who’s done that’ because it’s our pride and joy' 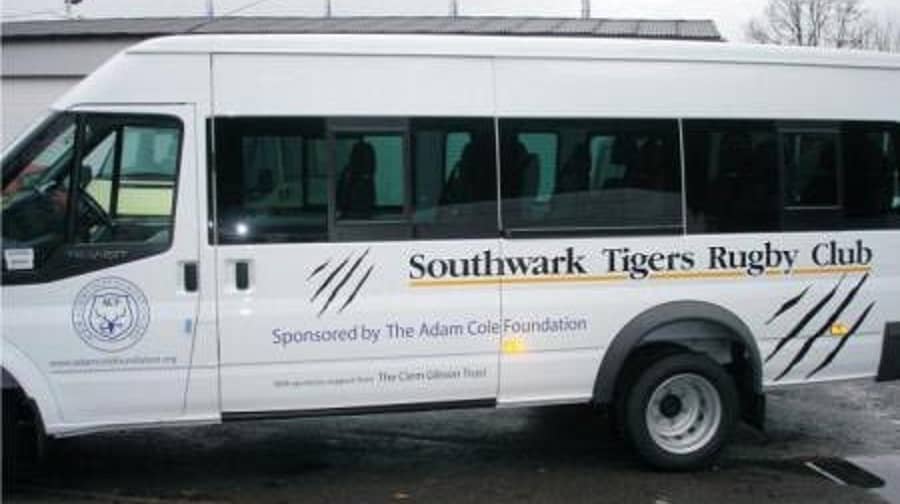 Southwark Tigers, the  first junior inner city rugby club in the country, has been left heartbroken after its “pride and joy” minibus was stolen.

Southwark Tigers Rugby Club chairman Vernon Neve-Dunn parked the minibus outside his home in Croydon on Monday, but awoke the next morning to find it had disappeared.

The bus is also shared by other youth and community groups in the borough.

He said there were no signs of broken glass in the quiet suburban road where the minibus, which has ‘Southwark Tigers Rugby Club’ and ‘Adam Cole Foundation’ printed on the side, had been.

Speaking to the News, the 58-year-old appealed for anyone with information to get in touch as the bus is “crucial” to the club.

“I was heartbroken,” he said. “I thought ‘I don’t believe it, who’s done that’ because it’s our pride and joy.

“We are a small charity and we were given the minibus new by the Adam Cole Foundation, which is also a small charity, about ten years ago when it cost about £27,000.

“We use it every week because most of our kids come off the Aylesbury Estate and places like that since we are based in Burgess Park and because we play rugby we head out of London, so it’s crucial.

“These kids, some of them don’t know the River Thames.

“I bumped into a few kids in Burgess Park and they said ‘they’ve stolen the minibus!’ and they were heartbroken too and it’s a big part to them because there’s nothing more exciting than getting into the minibus and driving out of London.

“Now that the season is finished we lend it to the CK BMX club and the cricket club and things like that to try and make it as useful for the community as well.”

Vernon said the club, which has eight junior teams, adult members, and a women’s and girls’ section, would not start playing again until September but that they would need to “seriously look at” how to transport their young members.

“Sometimes we are trying to transport 60 kids on a Sunday morning and the minibus is only one part of that,” he said.

“It’s also the base of the club because we don’t really have a base.

“I’d urge people to just keep your eyes open and any information will be really helpful.”

The minibus is described as a white Ford Transit in good condition with ‘Southwark Tigers Rugby Club’ and ‘Adam Cole Foundation’ printed on the side. The registration number is FG59 WCA.

A Metropolitan Police spokesperson said: “Police were called at approximately 07.53am on May 15 to reports of a theft of a van on South Way, Croydon.

“It is believed the vehicle was stolen from outside a residential address overnight. Work continues to locate the vehicle and those responsible for the theft. Enquiries continue. No arrests have been made.

“Anyone with information is asked to call police on 101.”