Southwark to lead a ‘planning revolution’ 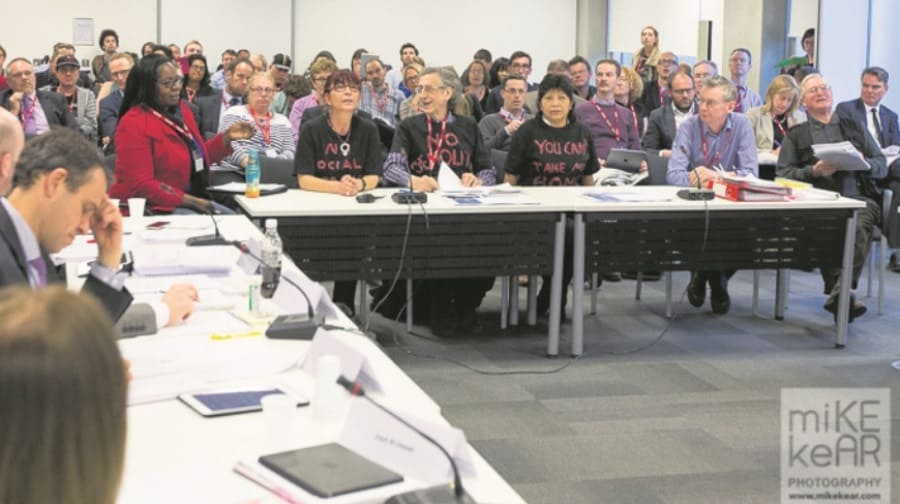 A packed planning meeting for the conisderation of the Aylesbury regeneration. Photo by Mike Kear

Southwark Council with help from the News is set to revolutionise the way people find out and respond to planning applications, not only across the borough but potentially across the whole of England and Wales.

In Southwark, despite having major regeneration projects and constant building work taking place, the percentage of people getting involved is dismal. But the figures are no better elsewhere in the country. Planning is a major issue for most boroughs but engaging ordinary residents in the process can be difficult at the best of times.

Unless an application effects you, your house price or your standard of living, getting involved in what is a rather mundane process is not top of your must do list. For centuries planning applications have been listed in local newspapers like Southwark News and this is something that local people, ministers and the press industry have fought to preserve to ensure transparency. However, everyone, including the local authority, wants to increase accessibility so people can have a say on what is being built in the borough.

According to Cllr Mark Williams, Southwark Council’s cabinet member for regeneration and new homes: “This is a chance for local people to get information more quickly about plans for their area.”

A pilot scheme run in conjunction with the News has been agreed by the Department of Local Government and Communities, which will involve a digital offering on top of the press notices, site notices and letters that are sent out to residents.

An IDOX system has been introduced that allows people to get instant access about current and previous planning applications online. However, our pilot wants to go further and allow people to register an interest in an area, road or postcode and receive notifications when applications are made via email and later on their mobile phones.

The use of notifications on people’s mobiles follows current statistics showing  that approximately 80 per cent of people in the country are now accessing the internet via their phones.

An app was considered but early research showed that people tend to use a limited amount of apps on their phones for games, travel or even dating, and that it  was unlikely planning applications would fit into that category. Getting notifications about plannings applications that affect you would more likely provoke a response.

“We need to keep up with how people want to receive information, and many people now run their lives from their mobile phones,” Cllr Williams explained.

Despite the major regeneration projects and glamour developments like The Shard it is often the small building works that attract the most objections.

Parents in Dulwich were up in arms recently with some saying they were prepared to move if an 82ft phone mast was given planning permission to be erected next door to a school and a nursery.

Nearly 300 people made objections to the “colossal” Vodafone 4G aerial proposed to go at the junction of Half Moon Lane and Village Way in Dulwich, a designated ‘safe route’ for hundreds of children to make their way to the surrounding schools every day. The proposed site for the mast, which would be taller than five double-decker buses, was next door to the Judith Kerr free school, overlooking the green space where the children currently play.  Local authorities are prevented from considering health concerns when deciding on phone mast applications, but the Vodafone application was nevertheless refused in March because it was out of scale with the surrounding buildings and made the pavement too narrow to ensure pedestrian safety.  Alex Graham, of the Half Moon Lane Action Group, set up in a hurry to object to the mast, said: “We’re delighted that this monstrosity has been rejected, but dismayed that the decision could still be overturned with an appeal over the heads of the council and the community since the refusal seems to rest on a technicality to do with the width of the pavement and not on the widespread fears over health risks.”

The average increase in responding to planning applications is up eight per cent since the pilot started, with advertising in the News and landing pages on both the council’s and Southwark News site.  The biggest survey on planning is set to take place in Southwark with 8,000 people who have responded to applications expected to be asked how they want to be consulted.

The weekly planning applications in the News will also feature QR codes (as they currently do on site notices – see pages 38-39) to encourage people to be able to get instant access on their mobiles to the full application.

“We’re hoping that by making it easier for people to find out about planning applications, we’ll make the whole subject more appealing to people. Planning doesn’t always excite people but planning decisions can have a huge impact on people’s lives. Information is power and we hope local people will engage more with the planning process if they can find information quickly and easily, tailored to their neighbourhood.

“We’re working across all our services to make them more accessible, and this is a great example of our commitment to modernise. I would urge all residents to register and join the discussion about shaping the places we live and work,” Cllr Williams said.

To register and to search, comment and view information on planning applications as well as get email alerts www.southwark.gov.uk/planningregister