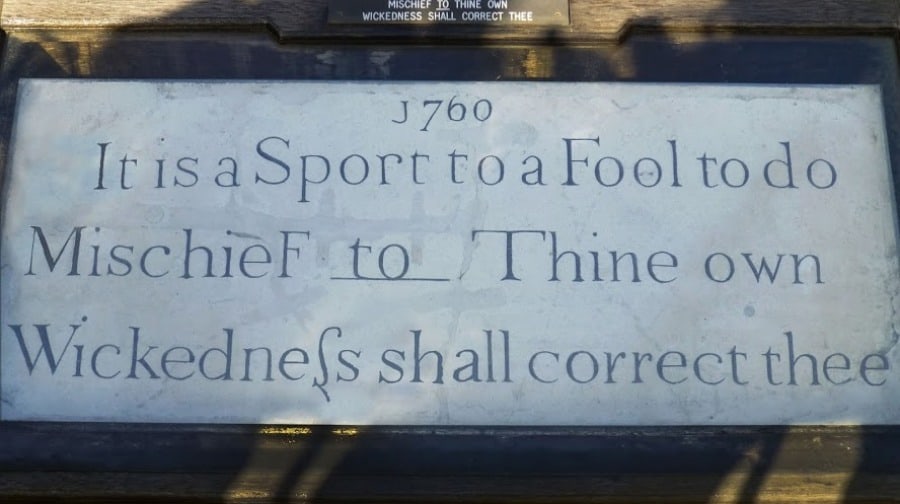 The remnants of the old 'village lock-up' in Dulwich

The last remnant of an eighteenth century lock-up for Dulwich drunkards is one of the Southwark treasures to gain listed status from Historic England this year.

The stone plaque, which was presumably fixed over the entrance of the ‘village lock-up’ at the junction of Dulwich Village and Court Lane, reads: ‘It is a sport for a fool to do mischief; thine own wickedness shall correct thee’.

The sign was discovered in 1922 during the development of a parade of shops at Dulwich Village and was subsequently erected in a garden in Carlton Avenue. Historic England awarded the plaque Grade II status because it is a “rarity” and “A tangible and evocative reminder of crime and punishment during the Georgian period.”

The Swedish Seaman’s Mission in Rotherhithe, which was nominated for a Southwark Blue Plaque last year, has also been listed because of its distinctive architecture. Kirkaldy’s Testing Works in Southwark Street is described as being of “international importance” as the first ever purpose-built independent commercial materials testing laboratory and it still houses one of the earliest testing machines to remain in working order.

A nineteenth century house in Borough High Street and the SE1 Church of the Most Precious Blood have also been listed.