“I’ve lost count of the number of operations they have announced. But what effect are they having?" London Assembly member said 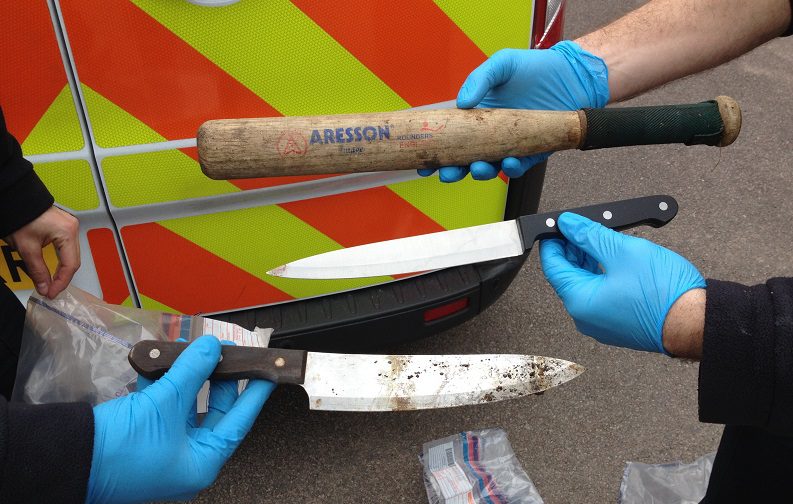 Weapons discovered during police 'weapons sweep' in the borough

Southwark has the worst record in London for solving knife crime cases, and like the rest of the capital, has seen an increase in reported knife incidents.

The data showed that gun crime had also become more prevalent in the borough, as the number of separate reported incidents involving a firearm jumped from 87 in 2015-16, to 128 in 2016-17. And the number of those cases that resulted in conviction rose from 23 to 29 – a conviction-rate reduction from 26.4 per cent to 22.6 per cent.

A statement from the Met said: “We are concerned about the rise of gun crime and rise of knife crime offences committed by young people and the changing nature of the offenders. Young people carrying knives are doing so for a variety of reasons including status, criminality and self-protection but only around a quarter are affiliated with gangs.

“Whilst we continue to focus on reducing stabbings by taking weapons and dangerous offenders off the streets, prevention and diversion from knife crime is key. There are complex social reasons why more young people are carrying knives and this cannot be solved by the police alone, we must work with communities to help combat knife crime.”

Reacting to the stats, Southwark and Lambeth’s London Assembly member Florence Eshalomi told the News she feared reduced officer numbers could be to blame, as local officers appeared to be soaked up for various city-wide operations.

She said: “We need the Met to be prioritising resources for the right things. Not taking out officers from Southwark when there’s a big operation.”

“We’re led to believe that these operations require a pooling of officers from each borough, and the borough commander can’t block it. And it means we can lose community officers,” said Florence, who sits on the Greater London Authority’s Police and Crime Committee.

“I’ve lost count of the number of operations they have announced. But what effect are they having?

“I hope for the new commissioner we don’t have these operations every other month.

“[For example] we need licensing officers to be available to carry out spot checks on shops that may be selling knives.”

She added that there had been a reduction in funding for community groups that tackle the knife –crime culture outside of the Met.

“I fear there has been a decline in funding for community groups. A lot of groups that are doing this kind of work are having their funding cut. We are clear it’s not an issue the police can deal with on their own,” she said.

The Met has yet to publish up-to-date figures for crime rates per council ward. But it was revealed earlier this year that in Dulwich and Herne Hill, burglaries had been falling. Analysis of insurance quotes by Moneysupermarket.com, published in The Guardian, showed that Dulwich Village ward felt a 29 per cent reduction in burglaries between October 2015 and September 2016.

Last week’s release from the Met also placed Southwark as having the third worst overall crime rate of any London borough for 2016-17 (not taking into account population size). Westminster had the highest overall crime rates: 54,977, which can be attributed to the excessive levels of “theft and handling cases” (30,367).  Overall crimes rates in Lambeth and Southwark were 37,844 and 35,479 respectively. Camden had 33,378 in total, and Tower Hamlets had 33,258.