Find out how our runners fared in the gruelling heat last weekend... 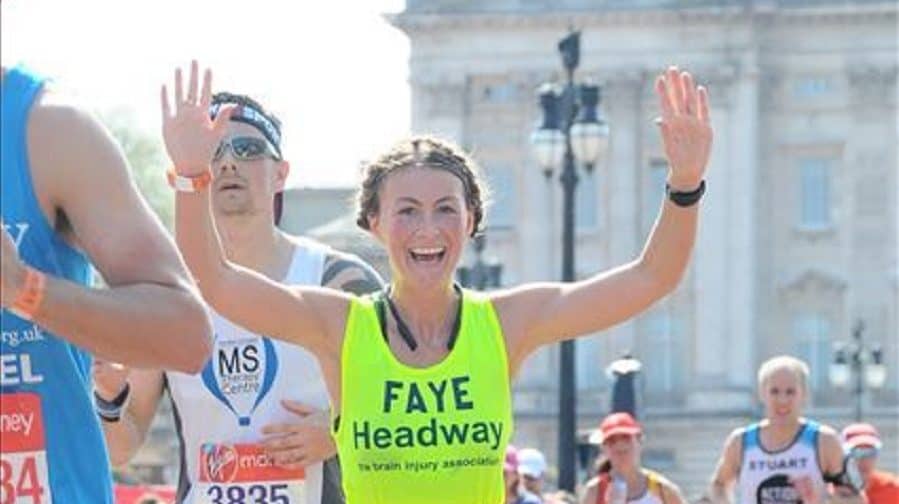 Runners from around the borough completed the London Marathon after months of gruelling training paid off, last weekend.

Samantha Cook completed the marathon in five hours and five minutes, raising £3,242 for the Stroke Association.

She said: “I ran in memory of my twin sister, Susan, and thinking about her whilst running really helped me to dig deep in the record temperatures. I will never forget it and I can’t thank #TeamStroke enough for the privilege of running for a charity that is so close to my heart.”

Bermondsey-based Faye Hetherington ran for Headway, the brain injury charity, which has supported her since a life-changing brain injury four-years ago.

Although she was more used to training in snow, she said: “I’d do it again tomorrow to help change people’s lives as much as mine has been.”

Former Olympic rower Kieran West crossed the race with a time of five hours and 44 minutes, an amazing achievement given he had come down with a gastric bug the week before and “felt drained” just a few miles in. He raised £3,500 for diabetes charity JDRF.

Galleywall Primary School assistant head Sarah Parbhu completed her first marathon in 5.52 hours, raising more than £2,300 for the Royal Hospital for Neurodisability. She commented: “I was proud of my home city and all the residents and spectators with their non-stop cheering, water pistols and jelly sweets! In particular, the families of Surrey Quays, Rotherhithe and Bermondsey where I saw families from Galleywall and Redriff Schools.”

Daniel Watson completed the race in four hours and six minutes, joking: “My legs have been very stiff today; stairs have been a real challenge!” The teacher from Peckham ran the marathon with his wife, raising funds for the Scouts.

Bermondsey boy Jake Clements crossed the finish line in five hours, raising £3,000 for the charity Chain of Hope, to fund heart surgery for children overseas, a personal cause as he was born with a heart murmur and needed open-heart surgery. He said: “Running past Bermondsey station was one of my highlights for me. The crowd shouting my name as I run past helped me along the way. I would like to say a massive thanks to my mum, Jane Clements for supporting me throughout my journey.”

Injuries early in the year and the unexpected heatwave meant Hamish McCallum “ditched any hope of a “fast” time and just concentrated on getting around the course”, but still finished in 5.43 hours.

“It was brutal but the huge crowds in Bermondsey and Surrey Docks all made it worthwhile,” said Lucas Green, who sits as Galleywall Primary School’s chair of governors. He completed the race with a time of four hours, twenty-two minutes and seventeen seconds, raising more than £1,400 for the Southwark Pensioners Centre.

Cassie Macnamara and Farid Sarwari, from London City Runners, both ran. Farid said:“It goes without saying that it was a tough run, I recall being surrounded by faces of anguish, despair and complete exhaustion towards the latter ten miles of the marathon. However, what was wonderful to see was the atmosphere and incredible support.”

Johnson Situ, who is raising money for the Change Foundation, finished in four hours and 44 minutes, telling the News: “Like many others I found the heat made it really difficult, so I’m pleased to finish in one piece!”

Former Rotherhithe resident Bobby Owen, ran for Barnardo’s. He said: “It was really hard at about ten miles, I really started to struggle. But I did it in four hours and 22 mins so I’m really proud of that, especially in this heat.” 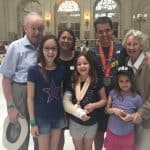 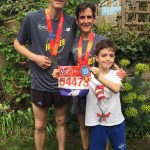 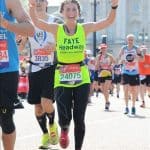 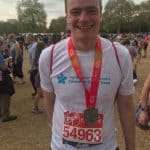 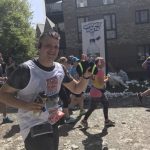 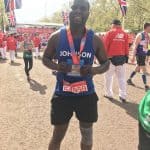 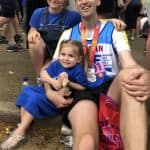 Kieran West with his daughter and goddaughter 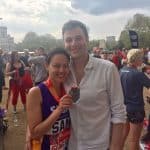 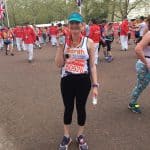 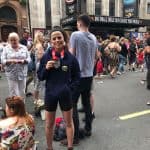 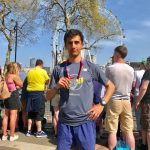