The News last saw Lylie on her 106th birthday in December last year, where she was enjoying a cake and champagne presented to her by staff from Marks and Spencer 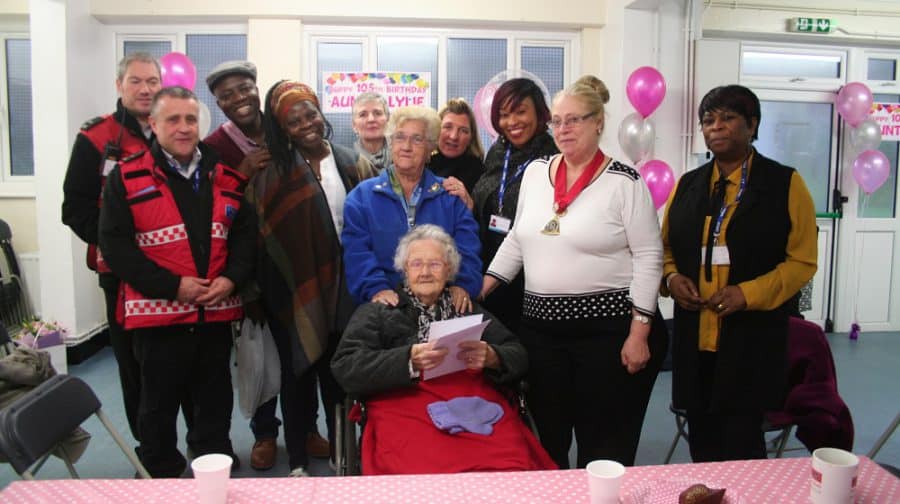 A funeral was held on Wednesday for the woman likely to have been Southwark’s oldest resident, 106-year-old Eliza ‘Lylie’ Mercer from Walworth.

Lylie, a life-long Millwall fan who was born and bred in Walworth, passed away at her home in Portland Street on Sunday April 2, shortly after 4pm.

She was raised in the now non-existent Eltham Street in SE17, in a house with eight siblings. She married twice, but had no children, which her grandniece Ashley Richards said was how she had lived so long.

Lylie also stayed in the area during World War Two to volunteer as a fire spotter, and had three uncles who fought in World War One.

Ashley told the News that her last meal was fish and chips from Marks and Spencer – where “all the staff knew her and would say hello”.

“She has worked since she was fourteen,” her niece Marilyn Bentley said. “She would go out at 4am to work at a local fish fry. And she would go to the baths after work in Manor Place.”

Lylie retired in her sixties, but carried on working at Esther’s Haberdashery Stall in East Street Market.

Marilyn added that among Lylie’s favourite places to go in Southwark were Abba’s Fish Shop and Arment’s Pie and Mash, both of which she used to visit twice a week.

Ashley said her and Marilyn would visit Lylie every week, ever since Ashley’s mum had died in 2014.

The News last saw Lylie on her 106th birthday in December last year, where she was enjoying a cake and champagne presented to her by staff from Marks and Spencer.

She was an expert knitter, and would make scarfs and hats with the Millwall badge. The last thing she knitted was a tea cosy in 2015.

When the News attended Lylie’s 105th birthday, she recalled how many of her friends and neighbours perished when St Peter’s Church’s crypt was bombed, with hundreds sheltering underground. But Lylie had been hiding in an Anderson shelter nearby and escaped unharmed.

Marilyn said Lylie’s father was a fruit and veg seller with a cart that he walked around Walworth and Bermondsey. She was also well-known to the East Street stall holders, who waved and said hello when her nieces took her for walks.

A wake after the funeral at Brenchley Gardens was held at the Nelson House TRA Hall in Bronti Close.