Southwark’s runners put in a marathon effort for great causes

Last week we previewed a selection of runners from the borough who were fundraising for some great charitable causes. Find out how they got on! 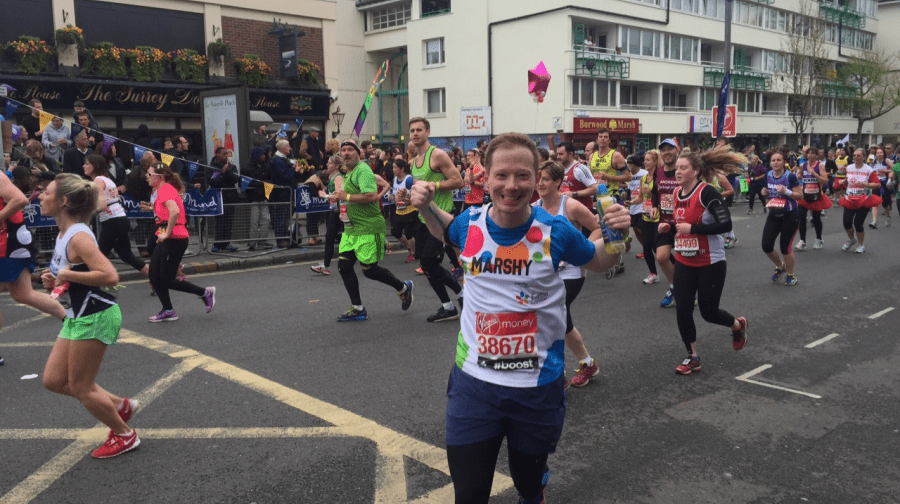 Daniel Marsh, who was fundraising for Evelina Children's Hospital

With a dodgy knee and a pulled muscle, a loving brother persevered to complete the London Marathon in five hours nineteen minutes in the name of his sister’s baby boy, who died at 26 days because of heart problems.

Peckham-born Daniel Marsh, 31, has raised over £2,000 for the Evelina Children’s Hospital, where he met his little nephew Corey for the first time and sadly had to say goodbye to him a year ago.

“It feels fantastic to know that I’ve run for an amazing cause”, said Daniel, who despite not being able to walk is already planning to run the Paris Marathon next year. “I must be insane,” he added.

Daniel said the crowds were “absolutely amazing” as he started to flag near the end. “The last four to five miles they really will you on and give the encouragement to dig deep – hearing the roar after you get going when they’ve been shouting your name is nothing short of inspirational.”

Chris Evans and Jo (right), one of the council staff members running for the Mayor’s charities.

The Mayor of Southwark’s runners have so far raised more than £6,000 for his chosen charities after running the marathon at the weekend.

Cllr Sunil Chopra said he was “very grateful” to the nine council employees who donned their running shoes on Sunday for two Southwark homelessness charities – UK Homes4Heroes and the Robes Project.

Former Mayor of Southwark, Abdul Mohamed, who ran the Marathon for his chosen charities last year, came back for more this year and has so far raised £415 for his successor.

Natalie Gewitzke (who recorded a time of 5:07:57) said:? “It was amazing, the best experience. It was totally incredible and I’m still on a high. Thank you to all the Southwark News readers who were so generous with their donations.” She raised £496 for Sands.

Jermaine McFarlane, who raised money for Get Kids Going

Jermaine McFarlane (4:27:00) told the News: “It was one of the best experiences of my life. I saw some amazing people in the race and the energy and encouragement from the thousands of spectators was truly motivating. I really enjoyed it! I’ll be back for more…” He raised £667 for Get Kids Going.

Michelle Thorpe of Homes 4 Heroes and Carl Newbold, who was running for the charity.

“It was great, I really enjoyed it. The atmosphere was fantastic, and it was great to see the Homes4Heroes banner across the track in Rotherhithe”.

Lisa Rajan (5:32:00) said: “It was an amazing day and, once again, the best crowds were in Rotherhithe and Bermondsey. Running through Surrey Docks ward is very special for me and one of the best bits of the race. I was also thrilled to have Amy, a little girl from Southwark who has Rett syndrome, come out to support me.  Seeing her cheer me on was a huge boost to keep going.” She raised £2200 for Reverse Rett.

James Coldwell (3:49:00) said: “Somehow managed a smile just before the finish line! I raised £1812 for Childhood First, a kids charity based on Borough High Street.”