Concerns are now growing about the South African and Indian variants 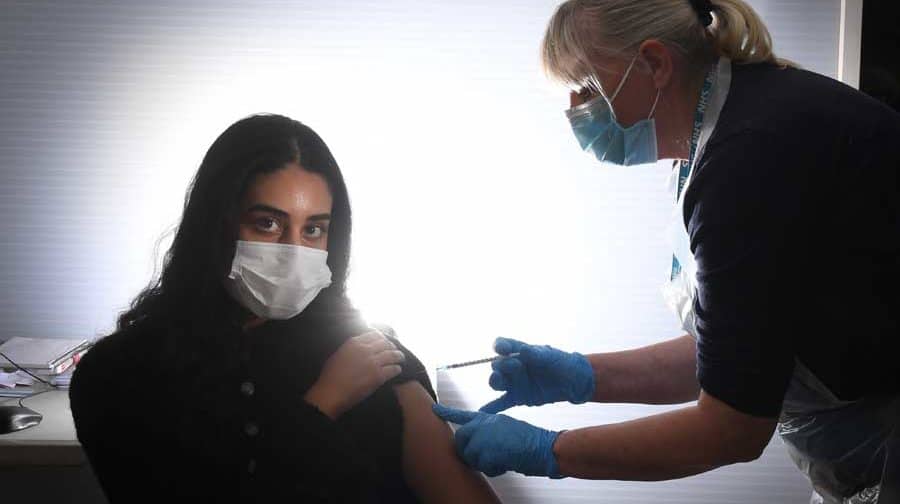 Millions of people have now had at least one dose of the COVID-19 vaccine.

Southwark’s vaccination rates are still some of the lowest in the country, despite huge efforts to boost uptake.

More than 75 per cent of over 65s have now been vaccinated in Southwark and the proportion of over 75s to receive at least a first jab is higher, at 80 per cent.

So far, more than 94,000 people have been given their first vaccine in the borough, including over 90 per cent of care home residents.

But due to the significant minority still unvaccinated in these groups, London boroughs are still lagging behind the rest of the country on the vaccine roll out.

Although the latest figures up to April 4 showing Southwark had vaccinated 84 per cent of over 50s may seem impressive, it puts the borough twelfth worst out of all 314 local authorities.

To put this in context, across the country over 50s coverage is now at 94 per cent and top performing midlands town Stratford-Upon-Avon has given jabs to everyone in this age group.

Westminster’s vaccine coverage for the over 50s was the lowest in the country at just 65.7 per cent.

Walk-in pop up vaccination centres have also been taking place around Southwark to reach those who are eligible but still unvaccinated, including at Guy’s and St Thomas’ Hospital on Saturday, April 17, in Peckham Square on Sunday April 18, and at Albrighton Community Centre on Monday. The NHS is also urging patients to continue being vaccinated during Ramadan.

There are concerns over the potential for the South African variant, which is believed to be potentially more transmissible, taking hold in care homes where some residents are still unvaccinated.

Last week we reported that everyone who lives, works and travels through Lambeth was being urged to get a COVID-19 test in the largest surge testing operation to date – also taking place in Wandsworth and Rotherhithe.

Forty-four confirmed cases and 30 ‘probable’ cases of the South African variant had been identified in Lambeth at the time.

On Monday, thousands of testing kits were being delivered to schools in Wandsworth, while surge testing is also taking place in Barnet, Hillingdon and Harrow after South Africa cases were identified.

Despite the outbreaks, confirmed COVID-19 cases remain very low in Southwark. On Monday, fifteen cases were identified, down from 698 on December 29, at the height of the winter wave.

In response to huge queues at testing centres last week, Dulwich and West Norwood MP Helen Hayes, whose constituency includes parts of Lambeth, said: “Thanks to everyone who has turned up to be tested so far.  I understand that problems yesterday with queuing and supply of test kits are being resolved. Please do try again if you had problems, the surge testing will be available for two weeks.

“I’m told by public health officials that the risk of contracting the South African variant is currently small.

“If everyone takes a test as soon as possible we can keep it that way, stop it from spreading any further and stay safe.”

More concerning to scientists is a new strain of the virus first discovered in India which is now the global centre for new COVID-19 cases.

The Indian variant contains two mutations which could make it less resistant to vaccines – though there is not enough research to confirm this either way.

According to the COVID-19 Genomics UK Consortium, which analyses COVID variants, as of Monday 182 cases of the Indian variant had been identified in the UK. The majority (162) were found within the last five weeks.

The country will now be on the government’s travel ‘red list’ from Friday, April 23.

Health secretary Matt Hancock told MPs the ‘vast majority’ of cases were linked to international travel and had been picked up through routine testing measures.

Many MPs had expressed frustration the country had not been red listed sooner including Labour’s Yvette Cooper. She says the government is still failing to learn lessons quickly enough.

In parliament last week she told MPs: “The Health Secretary is clearly right to put India on the red list and to safeguard the vaccine programme from new variants.

“However, the India variant has been under investigation for three weeks, and other neighbouring countries with lower and slower COVID rates were put on the red list ten days ago.

“Before Friday, we still had 16 direct flights from India and many more indirect ones.”

Some government advisors are concerned about the rapid growth of cases of the new variants in London and what it could mean for infection rates.

Professor John Edmunds, an epidemiologist based at the London School of Hygiene and Tropical Medicine and SAGE adviser gave a television interview last week where he said vaccination was key but would take time.

“What we are looking at in south London is an example of what we will see now in the coming months as we try our best to keep that variant out or at as low a level we possibly can,” he said

He added that it was ‘possible’ that ‘some sort of local restrictions’ would have to be imposed if mass testing did not stop the variant from spreading.

Expectant mums now advised to have the vaccine

Pregnant women in the UK have now been told it is safe to have a COVID-19 vaccine.

All expectant mothers will be offered either Moderna or Pfizer jabs when their age group or clinical risk group is eligible.

Although pregnant women are usually excluded from clinical trials, the greenlight was given by the Joint Committee on Vaccination and Immunisation last week after analysing data showing 90,000 pregnant women had been safely vaccinated in the USA.

Although pregnant women are not believed to be more likely to be infected, they are at greater risk of complications from the virus – especially in the later stages of pregnancy after 28 weeks.

A trickle of COVID-19 patients are now being admitted to hospitals in south London compared to a peak of 45 on March 20, 2020.