'I always thought that Peckham Square had so much potential, but was desperately underused' 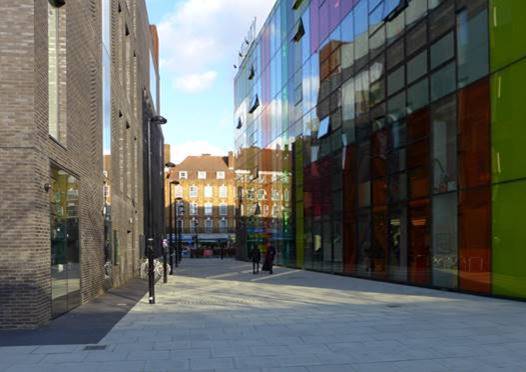 Spheron have been announced as the new architects enlisted to give Peckham Library Square a £6 million revamp.

This is the first infrastructure project as a result of the council’s ‘Southwark Stands Together’ programme, launched last year, in response to discrimination and racism experienced by people from ethnic minority backgrounds, many of whom have also been more affected by COVID-19 whether in terms of ill health or financially.

The council put together a panel of Peckham residents to choose which architects should take on the project from an all black and ethnic minority background list. Spheron Architects were selected, unanimously.

Sydney Simms, one of the panellists and a Southwark Young Advisor, said: “I was so glad not only to find out that I had been offered a place as a panellist, but that young people were included.

“Young people are a key part of our community and often our voices go unheard.

“Peckham Square is a central place and the future of it will affect everyone including young people as we are the future, that’s why this opportunity was so important to me, a young person living in Peckham.

“Being able to be a part of the interviewing process, I’m confident and fully support the decision of Spheron taking on the project as they understand the value of Peckham Square and want to engage with all groups of people that use the space.

“Moving forward, I look forward to being a part of the design process and encourage other young people to get involved too.”

Mickey Smith, another panellist and Peckham venue owner, said: “As a long-term Peckham resident, I always thought that Peckham Square had so much potential, but was desperately underused.

“When I was asked to help interview architects for the project, I jumped at the chance and for me, there was only one real choice: Spheron.

“Spheron’s attention to detail, understanding of Peckham, and full comprehension of the complexities of and positive potential of the square was music to my ears.

“I hope they deliver a space that is truly community-centric, safe by day as well as night, and set up to allow for the flourishing and celebration of the creative arts and Peckham’s unique Peckhamness.”

Tszwai So is the co-founder and creative director of Spheron Architects.

“Peckham is one of London’s most culturally diverse and vibrant neighbourhoods with a distinctive sense of identity, born out of a varied composition of geographies and shared memories,” he said.

“As a practice we champion the bottom-up design approach and share the vision of Southwark Council, which puts the aspirations of local people first, and responds imaginatively to those aspirations.

“We are coming on aboard not as the genius architect, but as the humble listener reaching out to the community.

“We very much look forward to helping the community recreate a much-loved square acting as a civic heart for Peckham in years to come.”