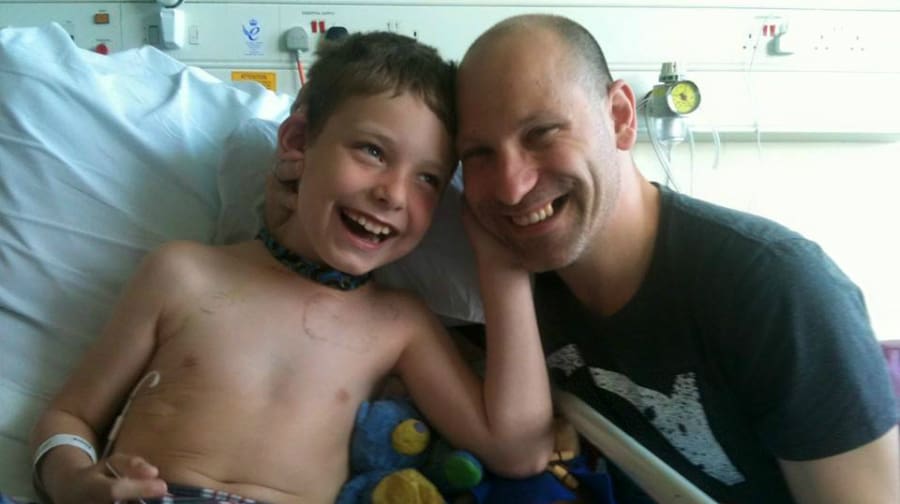 The father of a nine-year-old Bermondsey boy who died of a rare form of cancer has told how he keeps his son’s memory alive through the charity set up shortly before his death in 2014.

Before he passed away in January last year, brave Samuel Leib founded a charity to help the other kids in St George’s Hospital, Tooting, where he spent the last five months of his short life.

Since his little boy’s death, dad Martin has carried on and expanded the work of Samuel’s Charity – a task he described as a heart-breaking “double-edged sword.”

“The charity keeps Sam’s memory alive and fresh every day. It helped me through some very dark days when it was hard to get out of bed and gave me a direction and cause.

“But then there is the other side, in that it reminds you every day that he is not here. It was his birthday yesterday, a day that I should have been out with him, doing birthday things and celebrating. It is a constant reminder.”

It was Samuel who came up with the idea of the charity to help other sick children as he spent months in St George’s after being diagnosed with Precursor T-Cell Non-Hodgkins Lymphoma – a rare disease that ate away at the little boy’s body.

Martin said: “Inspirational doesn’t even come close to describing him. He was getting two incredibly painful injections a day and was on about fifteen or twenty different types of medication. Chemo gave him awful side effects and the medicine that was supposed to get rid of these side effects just ended up giving him more. He was being fed through a nose tube or drip and had trouble breathing at times.

“But even through all this, he was thinking of others. Even in the position he was in, he was thinking about how he could help the other children he knew in the hospital. The charity keeps this spirit alive even now after he has gone.”

Samuel’s charity has grown from modest beginnings, when it helped buy a new toaster for the children’s ward. From brightening up the walls with colourful murals to helping to introduce a new menu in the hospital cafeteria, the charity is making the lives of the kids who are spending their childhood in hospital a little more bearable.

Martin said: “Hospitals are grey and depressing and sad. It’s not good for a kid to be staring at a bare wall for days or weeks or months – there’s only so much TV you can watch. They can lose hope and stop fighting and that’s the last thing as a parent you want to happen.

“We are also doing our best to help mums and dads, by improving the sleeping areas and kitchens where they can rest up for a while when spending days or weeks in hospital with their children. Parents need to stay strong for their children and we want to make it a little easier for them.”

Martin said: “These are incredibly important in gaining support and awareness. Even in Bermondsey last weekend we had people coming up asking how they can help us, which is great to see.”

He appealed to News readers to do whatever they can to help, be it through donating money, participating in sponsored events or lending a hand at fundraisers.

He said: “Even in his worst days, Samuel was always thinking of others and staying positive. That’s how he lived all his life and the charity is a way of keeping this going.”

If you wish to donate to Samuel’s Charity visit bit.ly/1UAPkDi.

Kids enjoying the fun at the fete last weekend.