The group had moved into the boozer after it was earmarked to become a Foxtons. 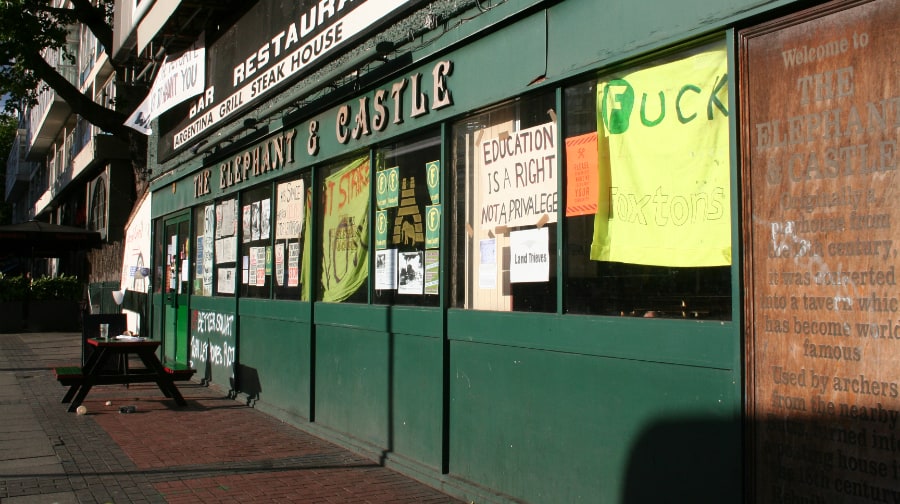 Squatters who moved into an historic pub last month when it was earmarked to become a Foxtons estate agent, have been evicted.

The Elephant and Castle pub has been occupied for weeks by around twenty people – a mixture of protestors taking a stand against the “gentrification” of the area and European migrants.

Bailiffs entered the pub on Thursday morning armed with a possession order from Lambeth County Court. The police were on hand but were not needed.

The group took over the pub, which dates back to the 1700s, in June but a legal loophole meant the police were unable to remove them from commercial property without a court order.

While the squatters were holed up in the pub, the Walworth Society managed to get the old boozer listed as an asset of community value, which means anyone wishing to convert the Elephant and Castle to retail or residential use will now need council approval.

Earlier this year the owners of the venue had their licence revoked following two violent incidents at the end of January. A late-night brawl on January 29 saw a man stabbed “in the eye with a pen, which remained there until it was removed by staff at hospital,” according to Southwark Council’s licensing committee. Two days later, another “serious assault” occurred at the venue, in which one customer accused another of inappropriately touching his girlfriend and struck him, causing facial injuries. The pub’s licence was temporarily suspended as an interim measure, but this suspension has now been made permanent following the committee’s meeting on March 2.

The outside of the Clipper has been damaged by squatters with paint.

A court order has been obtained to remove squatters from the Clipper pub in Rotherhithe.

Resident and member of the Save the Clipper group Steve Cornish said: “The rent-a-mob have been aggressive and got paint all over the outside.”

A spokesperson for developers McCullochs, who are seeking planning permission to convert the boozer into flats, told the News that they would soon be removed.

He said: “This is the third time that squatters have occupied the pub. We have removed them twice before and have got a court order to remove them again. We’re just waiting for the bailiffs to get back to us.”