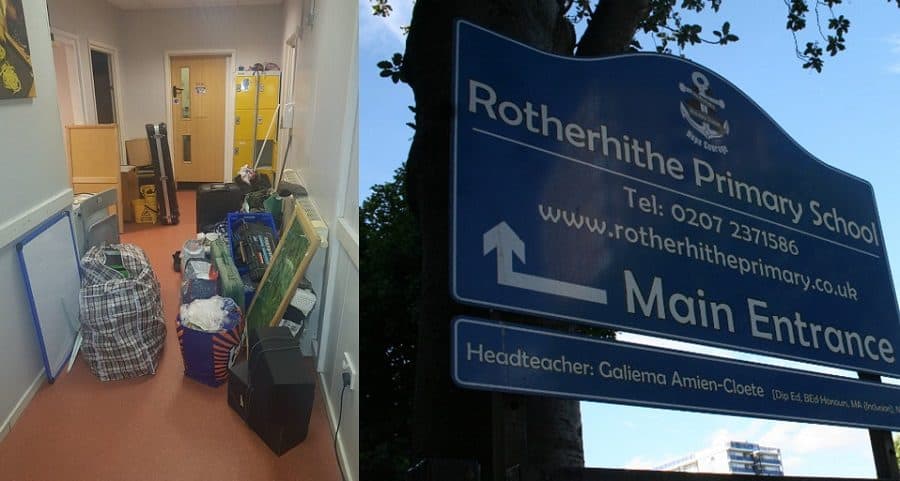 Squatters have taken over a disused nursery by Rotherhithe Primary School, sparking a legal battle by the school and council to have them removed.

As the News went to press, senior staff at the school were meeting with parents about an estimated five people who claimed squatters’ rights over the kids day care centre on Monday night.

The building looks onto the primary school playground, separated by a fence, with a Year Three classroom reportedly among those closest to the area squatters are residing.

Once concerned parent told the News he would not be taking his two stepsons into school until the squatters had left – and estimated another ten parents at least were taking the move.

In a letter sent to parents on Tuesday, the school said it was vigilantly monitoring the situation and that all access points to the Day Centre had been secured.

“We are requesting and urging parents not to make contact with the squatters or engage in communication with them,” said school authorities.

“The police and local authority have given advice and we are currently being supported by the legal team to take the necessary legal action to address this occupation.” Rotherhithe Primary School did not return a request for further information by the time of publication.

One worried father, who gave his name as Jack, said he was unhappy at how the school had handled the squatters, thought to be four men and one woman.

“We’re really worried about it. We found out yesterday, the school didn’t send out a letter to every single parent, we got told by another parent,” he said.

“We had a meeting this morning with the school and it felt like they were making excuses for them.”

On Tuesday night when he discovered that the building had been occupied without the school’s permission, Jack went down to the premises, which has only one gate separating it from the playground, to talk to them.

“The first time, I said ‘my kids go to this school’ And he said, ‘I have a right to be here’ and something regarding squatters’ rights.”

“He said, ‘You’re more than welcome to come around.’ He seemed to be treating it like it was his own house. He found it on a Facebook group for squatters.” Southwark Council said it may take a bit of time for the individuals to be evicted, but that it wanted to reassure parents it was well-versed in the process for securing squatter evictions.

“We are currently working with the school and the police to carry out the legal process of eviction,” said Cllr Jasmine Ali, cabinet member for children, schools and adult care.

“The council’s legal team is supporting the school while we deal with the issue, which may take a bit of time but will be permanently resolved as soon as possible.

“Where any of the squatters have genuine housing needs, this will be identified as part of the process to vacate the building before it is more securely sealed to ensure it doesn’t happen again.”

She added she wanted to thank parents for their patience while the situation was being dealt with.