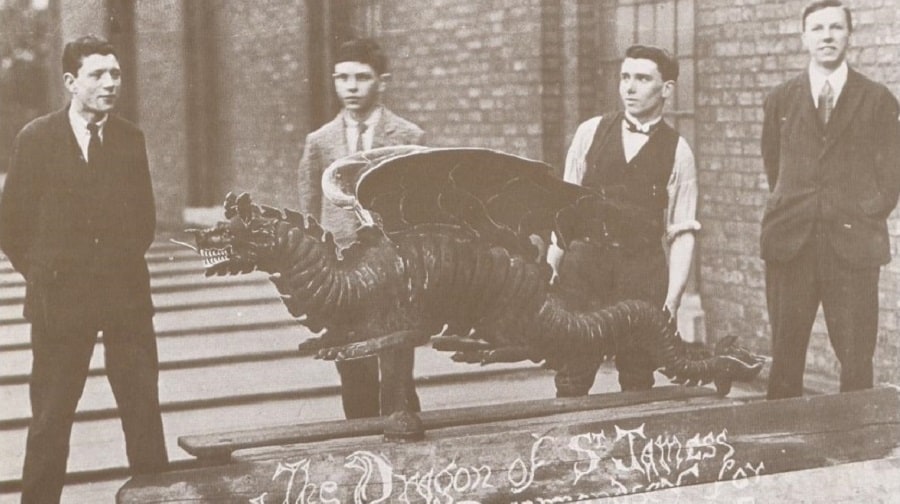 The golden dragon weather vane which sits atop St James’ Church in Bermondsey will go on show to the public for the first time in almost a century.

The eight-foot creature will be taken down to be repaired and regilded before being displayed in the church in Thurland Road over a long weekend.

It is believed it will be the first time the weather vane will be on show to the public since June 1925.

The church’s tower will also be opened to the public after work is carried out to repair the stonework on the tower and portico and repaint the clock face and bell. Gary Jenkins, vicar of both St James’ and nearby St Anne’s, as well as area dean of Bermondsey, said a dragon may have been chosen for the church’s weather vane to chime with a church across the water.

“I think it’s to do with the fact Mary-le-Bow, across the river from here, has a dragon,” he said. “Also the dragon is the symbol of the City of London and the crest has got the dragon and the cross of St George on it, so there’s always been that connection.

“I wondered if some of the people who funded the building of St James’ Church were city businessmen, because in those days they lived in Bermondsey which was a sort of village on the river.”

The repair work is being funded by a £232,000 Heritage Lottery Fund grant, together with £57,000 from the Parochial Church Council of St James.

It will last 20 weeks and is expected to be complete by mid-September.

“The last major work was about 25 years ago but over the last 50 years the building has been repaired,” said Mr Jenkins.

“All the stonework on the tower will be repaired – there are literally bits falling off – and the clock faces are going to be repainted and refurbished and obviously the dragon itself.

“There will be an opportunity for people to ascend the tower right to the top and the stone masons will give them a tour and show them the work being done.”

Two open days will be arranged for the public to view to the tower and dragon.

The dates will be publicised once they have been confirmed.