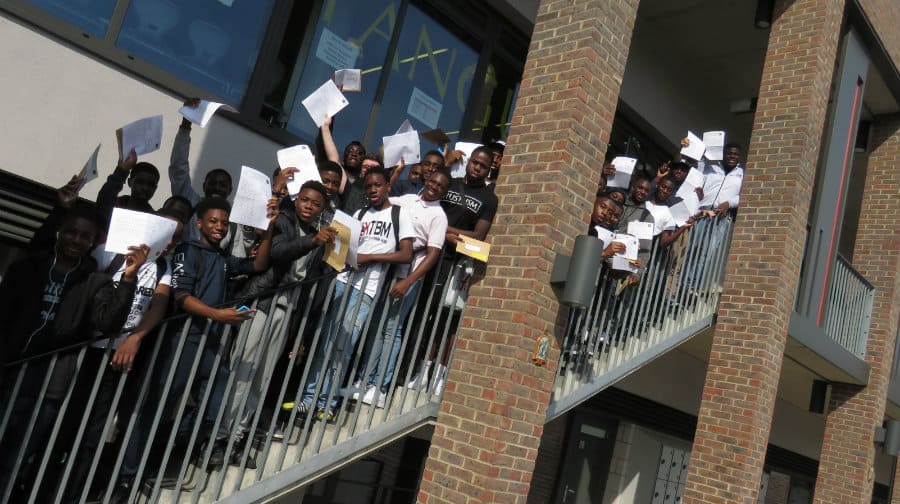 Records were broken yesterday at St Thomas the Apostle College in Nunhead, as 82 per cent of its pupils achieved at least five grades from A* to C.

The school’s executive head said the headline figure was a “phenomenal” improvement on last year’s rate of 68 per cent. Ninety-one per cent of all results in English were also an A* to C, and 88 per cent of pupils passed a C grade in Maths.

Executive head teacher, Mr D Cefai, said: “What an outstanding achievement in such a short time.

“These results continue to represent a new era at St Thomas the Apostle with results to match our wonderful new buildings. I am very proud of this year’s achievements and I am looking for to consolidation and improvement in the following years.”

Jamele Mcintosh, who earned five A*s, six As and one B grade, told the News he “forgot” it was results day that morning.

“I’m not going to lie, I forgot it was results day this morning. I just woke up and didn’t think about it,” Jamele said.

“But I guessed I had done well, because I saw online that the school had got a high percentage for English and Maths. I’m happy now – it all feels worth it.

Omar Sesay, who scored one A*, five As and four Bs, told the News: “I could have done better, but I’m most proud of my A in Further Maths and an A in Physics, but I could have worked that little bit harder.

“In A-levels I’m going to do Maths, Further Maths, Physics and Computer Science. I’m really interested in Computer Science and there’s loads of jobs available, it’s everywhere in all businesses.”

Meanwhile, sixteen-year-old aspiring gymnast Dominic Mensah, who has a represented Team GB in the World Championships, was also chuffed with his results.

Dominic said: “I got an A, five Bs and four Cs. I’m going to study Biology, Psychology and Geography at A-level.

“I’m really proud of what I got, considering all the hours I also put into training. I’m so glad I passed everything.”