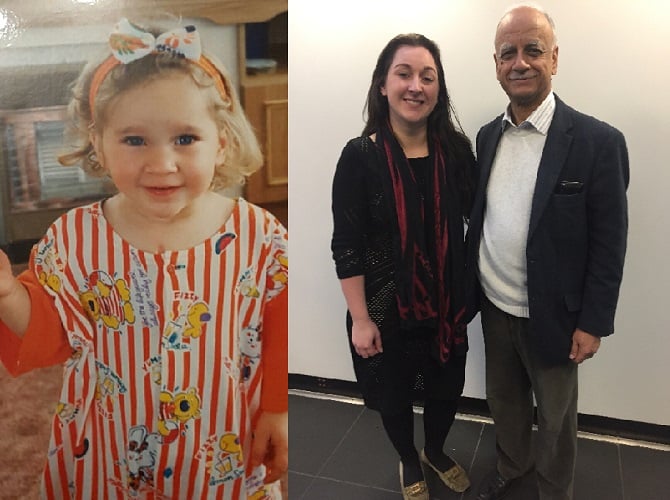 A young woman has had a pioneering heart procedure carried out at St Thomas’ hospital by the same doctor who saved her life as a baby, writes Becky Morton…

Samantha Blake, 27, from Hayward’s Heath in West Sussex, was one of the first people in the UK to have the new minimally invasive treatment, which prevents the need for open heart surgery.

The procedure was carried out by Professor Shakeel Qureshi, the same doctor who operated on her at Guy’s Hospital when she was seventeen-months-old.

Samantha, a barrister’s clerk, was born with Tetralogy of Fallot, one of the most common heart defects for newborns. The condition causes the heart to form abnormally and affects around one in 3,000 babies born in the UK.

Patients with Tetralogy of Fallot require major corrective surgery as a baby as the condition leaves patients with a heart valve which does not close properly, causing blood to leak. An operation is usually needed to mend the leaking valve in early adulthood.

Last autumn Samantha had a new replacement, known as the Venus P-valve, fitted through a minimally invasive procedure by Professor Qureshi.

Samantha said: “I felt in very safe hands with Professor Qureshi – he is like an old friend because he has looked after me since I was a newborn. It was a big relief having the new procedure because there was a chance I would have needed open heart surgery again without it. I’d always felt fortunate that I had no memories of my operation as a baby so it had been scary to think it might happen again as an adult.”

Until recently, other replacement valves available to fix the leakage were too small to fit 80% of patients, meaning the rest needed open heart surgery for a second time. The Venus P-valve, which is made of animal heart tissue, is available in much larger sizes so is expected to be suitable for most patients born with Tetralogy of Fallot.

Professor Qureshi is the lead investigator in a clinical study assessing the new device.

He said: “It is preferable for patients to avoid having open heart surgery more than once. They can be left with scarring inside the heart from the surgery they had as babies which may make it more challenging for surgeons to open the chest safely again, and there are higher risks of bleeding and infection compared with less invasive procedures.”

In 2015 Samantha noticed she was experiencing breathlessness when climbing stairs on walking up hills.

“I had regular scans to keep an eye on the leaking valve and last year it had got a lot worse. Leaving it wasn’t an option because it would have continued to deteriorate and eventually my heart wouldn’t have worked properly.

“My breathing returned to normal immediately after the procedure. I feel lucky to be one of the first people to have the new replacement valve, it’s like a weight has been lifted knowing that the leakage has been stopped now.”

Professor Qureshi said: “Around 100 people have had the valve implanted in the world so far and the majority have had good results. This is a very exciting development which could prevent many people across the world having major surgery.”