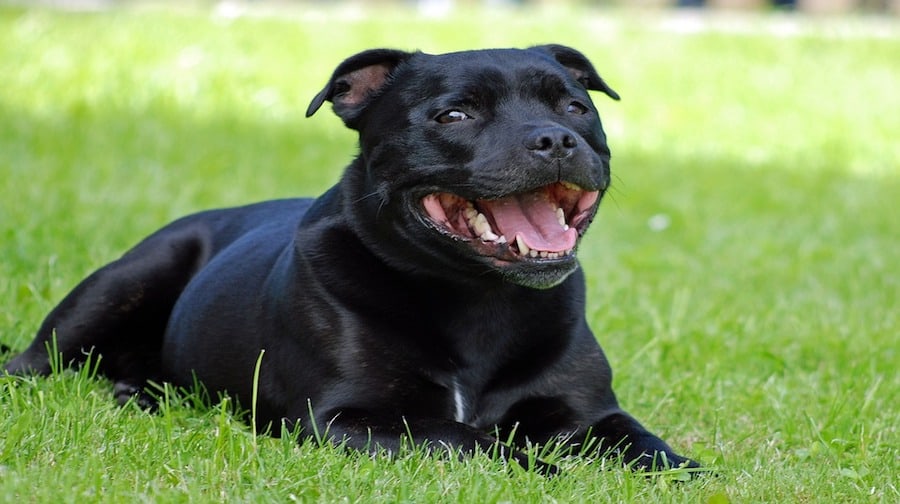 Calls to ban Staffordshire Bull Terriers under controversial dangerous dog legislation were thwarted in Parliament last week, to the relief of many owners and vets in Southwark, writes Anisha De and Katherine Johnston…

People for the Ethical Treatment of Animals (PETA) wanted to ban breeding Staffies under the same legislation that outlaws Pit Bulls and three other “fighting dogs” – the Japanese Tosa, Dogo Argentino and Fila Brasiliero – from the UK.

It claimed that the decision was “best for dogs” as they are the most commonly abused and abandoned breed.

But more than 160,000 dog lovers signed a petition against the ban, triggering a Parliamentary debate on July 16.

Battersea Dogs and Cats Shelter has voiced support for the breed, claiming that the gentle and loyal dogs are often misunderstood for the way they look.

This is Cassie. We got her 9 years ago from Battersea and she is the most adorable, loyal and placid dog you could meet. ?? pic.twitter.com/FGTf3ZK0lm

A Battersea spokesperson said: “Last year we re-homed 350 “Staffies” that have become wonderful, life-changing companions and their new owners constantly tell us that these dogs make a wonderful addition to their family.

“We know that in the right environment, and with the right owners, thousands of proud owners will tell you that Staffies really are softer than you think.

“We know these owners, just like us, will be appalled by the slightest suggestion of banning the breed.

“The fact that over 150,000 people have signed this petition is testament to how many people across the UK love Staffies and have had their lives touched by these great dogs.

“We, and every other major dog welfare organisation, are opposed to breed-specific legislation – which has failed to protect the public.

“Dog attacks have continued to rise since four breeds of dogs were banned under the Dangerous Dogs Act 1991, proving that these laws do not work.

“Adding another breed to the list will not keep the public safe and will lead to thousands more innocent dogs being needlessly put to sleep.”

Staffies are the most reliable and consistently soft breed. Battersea gifted us with one of the thousands of love bug Stafs #RescueIsBest #lapdog #therapydog pic.twitter.com/qgOirR1m9m

Animal charities the RSCPA, the Kennel Club, Dogs Trust and Blue Cross had joined Battersea in publishing a joint statement arguing that outright bans on particular breeds does not make people safer.

“BSL has led to thousands of dogs being subjected to stressful procedures and many have been needlessly euthanised because of the way they look.

“PETA told the inquiry they support the ban and would like the law to be extended to include Staffies.

“They claim these types are the most abused and abandoned so believe that breed specific laws help prevent more dogs, which can be so cruelly treated, coming into the world.

“However, we do not agree that BSL is the solution to this problem and have met with PETA to raise our concerns.

“We understand Staffie owners are anxious about the future but it is reassuring that during last week’s session of the inquiry, it was stated that there were no current plans to extend the number of banned breeds.

“Staffies, pit bulls and other bull breeds can make wonderful, family pets; they are all individuals and should be treated as individuals.

“We will certainly continue to fight against BSL and continue to rescue, rehabilitate and rehome Staffies, and champion them as a breed.

“We now await EFRA’s report and recommendations and hope that this process leads to a full review of BSL and, ultimately, the repeal of this unjust and prejudicial legislation.”

During the debate, Stafford MP Jeremy Lefroy emphasised the Staffordshire Bull Terrier as the mascot of the old Staffordshire Regiment – called Watchman – saying that many positive views are held over the breed.

At the end of the debate, The Minister for Agriculture, Fisheries and Food, George Eustice MP, confirmed that the breed would not be subject to the ban, saying: “the Government have no plans at all to add Staffordshire bull terriers, or any other type of dog, to the list of prohibited dogs.”

It was also argued in parliament that more emphasis should be put into tackling irresponsible dog ownership, rather than targeting specific breeds. “A blanket ban doesn’t take into account the owners or the dogs themselves and I’m really surprised PETA called for it.

“They were saying it was to protect the breed and it was in the breed’s interest, but we would have had to put to sleep hundreds of thousands of healthy, and happy Staffies who have never had any problems.”

So do Staffies deserve their fearsome reputation? After all, the breed is one of several originally bred for fighting and does have a particularly powerful bite.

“Staffies are a really loved breed, and can be such good, family dogs. But like all breeds, early experiences can affect a dog’s behaviour.

“There is a common misconception that their owners are always teenagers with an aggressive looking dog on a chain.

“At work I’m more worried about being bitten by Golden Retrievers, Jack Russells, and Chihuahuas.”

Staffie owners Peter Reder and Krys Myszka from Peckham Rye were delighted that the proposals were given such short thrift.

The couple, from, Choumert Road, have lived in the area for 28 years and are the proud owners of Scarlett, a Staffie who joined them from Battersea  in early 2018, after her previous owners were unable to continue looking after her.

The couple believe she is about five years old, and say she has had no trouble settling into her new life. Before Scarlett, the couple had adopted a Battersea Staffie called Maisie.

Peter, 57, said: “The reason I have always liked Staffies is that I had one as a child.

“In the 70s they did not have this reputation – and as a breed they were far less common.

“The bad reputation seemed to grow in the 80s and 90s, and it was really sad to see.

“I’m sure when we first got Maisie some people crossed the road when they saw us coming.”

Would he recommend them as a family dog? “Yes – the Staffies I’ve known have always been lovely dogs and really affectionate. But of course, it’s all about the owners.”