Star Wars: the next generation? 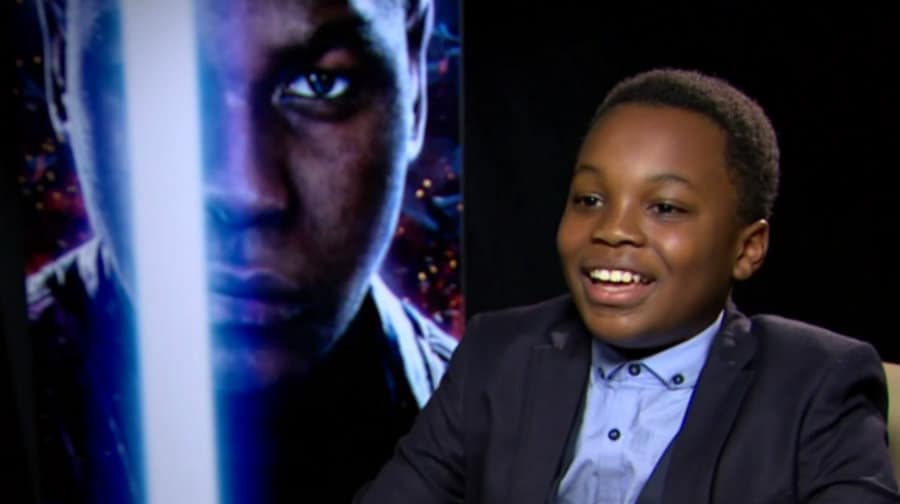 Jonas, 11, gets to grill Star Wars leading man John Boyega about how to make it big in Hollywood

A schoolboy from Peckham got to meet a Jedi last week when he was sent by BBC’s Newsround to interview Star Wars’ leading man John Boyega.

The pair had plenty to talk about because eleven-year-old Jonas now goes to Theatre Peckham, where Boyega learned his trade.

When Jonas asked what productions Boyega, who grew up on the Sceaux Gardens estate, had been in when he was the same age, the Hollywood sensation replied: “I was Mrs Wobble the waitress. I think was my best performance to date.”

Jonas then asked if Boyega had any tips for him because he wants to follow in his footsteps all the way to Hollywood.

Clearly impressed by his interviewer, Boyega said: “You’ve already started very well. At eleven years old, you’re at Theatre Peckham, where I was.  You need to train because it’s going to get to a certain stage and you won’t be singing about clowns anymore and that’s going to be fun.”

Boyega as a young student at Theatre Peckham

After Jonas asked Boyega to do an impression of Chewbacca, the pair swapped autographs.

His former mentor at Theatre Peckham, Teresa Early, was invited to attend the UK premiere of the seventh instalment of the intergalactic franchise and tweeted: “Theatre Peckham Alumni @JohnBoyega at #StarWars premiere! Thanks for invite John! A real pleasure!”

In a galaxy not so far, far away in Peckham, Darth Vader was joined by enthusiastic Star Wars fans for a showing at Peckhamplex.

The cinema director, Marianne Gray told the News, every time John Boyega came on screen, the packed auditorium erupted into spontaneous cheering. The Star Wars screenings have been full several times a day with those making a special effort in fancy dress getting a round of applause from their fellow cinema-goers. Peckham hit the headlines this week when news emerged that Boyega had taken co-star and Hollywood heavyweight Harrison Ford for some Nigerian food at the 805 restaurant down the Old Kent Road.

Southwark NewsNewsStar Wars: the next generation?