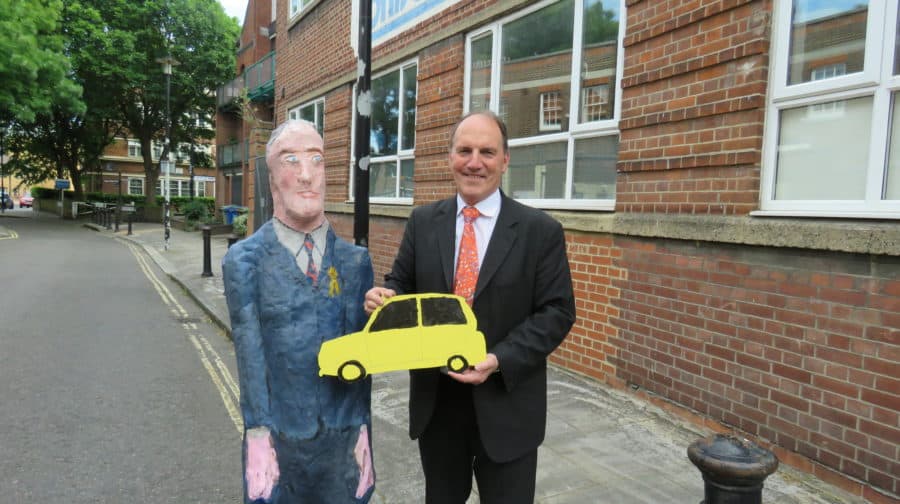 Sir Simon Hughes, pictured with his statue outside of the London Bubble Theatre Company

A statue has been unveiled in the likeness of Sir Simon Hughes, the former long-standing Bermondsey and Old Southwark MP, after a charity bidding war.

The uncanny statue is the unofficial mascot of the London Bubble Theatre company on Rotherhithe’s Elephant Lane, called the Rotherhithe Man.

The Rotherhithe Man was born out of a production of Gilgamesh at the turn-of-the-century, and has since donned many guises over the years.

But as a winning auction prize at the theatre company’s annual fundraising dinner, bidders were given the opportunity to have the statue made into any local figure.

A winning £150 bid was submitted by Jon Dyer, of Bermondsey-based funeral directors FA Albin & Sons to have the statue made-over. But instead of posing for the papier-mâché portrait himself, Mr Dyer nominated the former MP in his place.

Sir Simon, who is chairman of London Bubble, professed himself to be a fan, joking: “What great work – even though a bit embarrassing for me to be a statue.”

Michael Breakey, who leads a project affiliated to the theatre and came up with the auction idea, said: “People love a quirky lot at an auction.  What could be more quirky than having your portrait painted onto Rotherhithe Man?

“We knew that it would be irresistible!”

However, the Rotherhithe Man will soon take on another persona, said the theatre – although it has yet to be a woman.

To nominate someone to be the next face of the statue, contact the theatre via kehryse@londonbubble.org.uk for further details.