The staunch remainer: Labour’s Helen Hayes sets out her stall for Dulwich and West Norwood for the GE2017

“I think in a constituency where we have some children able to access the best possible set of facilities, while other children from the same community are not able to fill their potential because they are going hungry, this is a situation that nobody should sit comfortably with,” Helen said 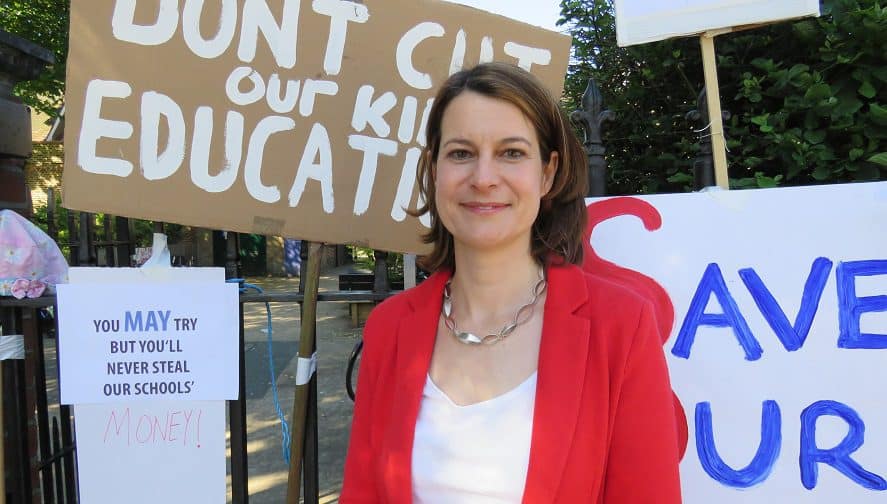 It’s been an intense two years since Labour’s Helen Hayes was elected to fill the boots of Dame Tessa Jowell, and represent a constituency with Dulwich at one end, and Brixton at the other.

Not unlike her more outspoken colleague in the north of the borough, we know Helen didn’t vote for Jeremy Corbyn in either of the Labour Party’s leadership elections. And that she went against Corbyn in a vote-of-no-confidence after the EU referendum.

In January’s vote in Parliament to trigger Article 50, Helen defied the Labour leadership’s orders, and voted against. A resolute remainer, Helen said she could not vote for Brexit unless there was a second referendum on the terms of Britain’s negotiation strategy, or if a general election was called.

Be careful what you wish for, some might say. But then look at her mighty 16,000 majority from the 2015 general election, and you could assume she’ll be safe.

I start by asking: is she emphasising to people that a vote for Labour here is a vote for Jeremy Corbyn?

That doesn’t explicitly answer the question, of whether she has been mentioning Corbyn’s name to residents, upon whose doors she’s knocked. And it’s quite unmissable that her leaflets are devoid of Corbyn’s name.

But how does she reconcile that Labour’s manifesto promises to deliver Brexit, without the second referendum she called for?

“There isn’t a single one of the main political parties which is offering not to implement Brexit,” Helen says. “I’m still very critical of that referendum… but I think it would be a very dangerous thing indeed to ignore that national vote.

Labour and the Lib Dems have been dining out on difficulties Theresa May has faced whilst dealing with EU leaders – take the suggestion of a £100bn leaving fee, for example.

But why assume a Labour negotiation, led by Jeremy Corbyn, would be such an amicable affair? Especially when many suspect the EU wants to make an example of us.

“All negotiations are based on relationships,” Helen says, before accusing Theresa May of being “arrogant” in her approach, which was “bound to illicit a fractious response” from EU leaders.

I put to her a criticism that many Brexiteers have levelled at Labour, that her party’s suggestion, “no deal would be worse than a bad deal” actually weakens Britain’s negotiating position, because it implies we need the EU more than the EU needs us.

“I wouldn’t quite say we need the EU more, but there is a relationship of dependency there,” Helen says, because the alternative would be to “fall back on World Trade Organisation rules,” (which would make our trade with the EU more costly, and affect our economy).

She’s not denying the EU has taken a combative approach, but says its behaviour, including the £100bn leaving fee “was a consequence” of the Tories’ handling of the negotiation.

Over to a more immediate problem on Helen’s doorstep: reported knife-crime cases are going up, with conviction rates going down. The News has reported on Helen’s opposition to the government’s decision to close Camberwell Green Magistrates’ Court, and she’s as quick as anyone to point to reduced numbers of police officers as part of the problem.

The Labour Manifesto pledges to hire 10,000 more officers to help deal with “worrying rises in some of the most violent offences, including gun and knife crime”.

Spread around the country, that’s maybe 1,000 more officers for London. Split 1,000 between 32 London boroughs, and Southwark might be lucky to get 30 more bobbies on the beat. So is there anything more that Labour can offer?

Helen said: “I wouldn’t expect those 10,000 police to be completely evenly distributed around the country, so I would expect the Met to get a good chunk of those resources, and I would certainly expect Southwark and Lambeth, as the most intensive boroughs to police anywhere in London, to get a decent number of those officers, and that’s certainly what I would be arguing for.”

She adds: “We need an urgent response to knife crime, it must be a multifaceted response that’s about policing and wider services as well,” pointing to “cuts in funding” for community-led projects as another part of the problem.

One local issue Helen’s been especially vocal about was campaigning against education cuts, and the government’s plans for a new “national funding formula”. But Labour’s education policy – to introduce VAT to private school fees – could equally worry parents who send their kids to this area’s three private schools.

The VAT, Labour says, would fund free schools meal for primary school pupils, something which is already available at schools run by Southwark Council. So why would parents at Dulwich College, Alleyn’s School, or James Allen’s Girls’ School, vote for that?

Helen points to the obvious benefits of those free school meals “helping children learn because they’re properly fed… building social cohesion by teaching kids to eat together”. But she says it will be up to those private schools to “decide to what extent they take a hit and readjust their fees… and whether they let that burden fall on parents”.

When I put to her a widely-made criticism, that VAT (a 20 per cent rise in fees) will push more parents to send their kids to already under-resourced state schools, Helen calls the policy “a  relatively small intervention in the fees structure” that private schools “will have to adjust” to.

She adds: “I think in a constituency where we have some children able to access the best possible set of facilities, while other children from the same community are not able to fill their potential because they are going hungry, this is a situation that nobody should sit comfortably with.”

Do you mean stall, rather than stool?

Southwark NewsNewsThe staunch remainer: Labour’s Helen Hayes sets out her stall for Dulwich and West Norwood for the GE2017