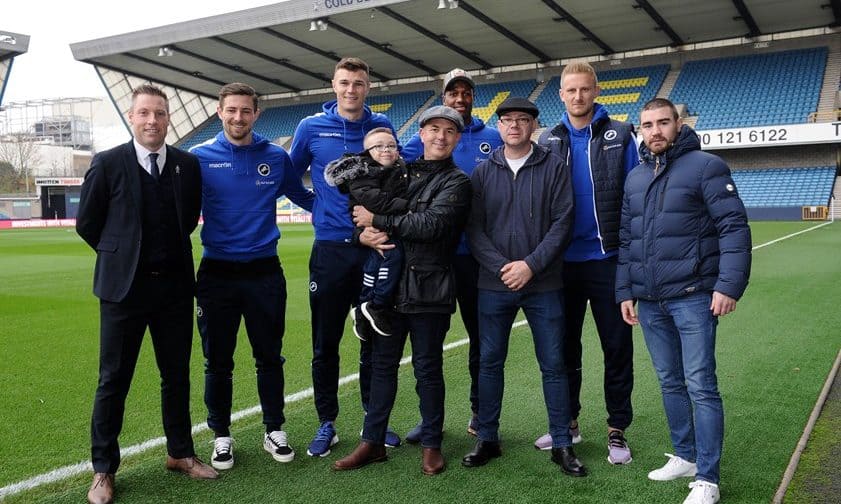 A Millwall supporter running a half-marathon after being inspired by Harvey Brown, the ten-year-old superfan who has the rare Morquio syndrome, has raised over £5,000 for charity.

Steve Rendell, from Reading, is running the challenging London Landmarks Half Marathon in aid of the MPS society, a charity helping those affected by a body of rare life-limiting conditions.

Millwall fanatic Harvey, a common sight at the club’s games, has the rare Morquio syndrome which stunts skeletal growth, leaving sufferers with weak bones, a tendency to develop heart disease, and impaired vision and hearing.

The little Bermondsey boy, who lives just a stone’s throw away from The Den, is just one of 78 children in the UK with the disease.

“Harvey is always so chirpy and a really lovely lad. After seeing Harvey lead out Millwall that day and just seeing how brave he is has inspired me to tackle the London Landmarks Half Marathon,” said Steve.

“By taking on what is a big challenge for me, I want to raise awareness around this rare disease and also to help people like Harvey by raising money for the MPS Society to fund research and medical support.” Steve, pictured with little Harvey, who has the rare Morquio syndrome

The money raised from the half-marathon, which takes place on March 24, will help provide professional support to people and families affected by MPS syndromes – of which Morquio is one.

Harvey will be made a VIP for the day of the half-marathon, so that he is able to cheer Steve on from the finish line.

Harvey’s doting dad, Dean, said the family was hugely thankful to Steve and to Millwall for all the support they had given.

“What Steve is doing means a lot to us as a family,” he said.

“Harvey has such a rare disorder and the MPS Society is such a small charity that we need support like this to help Harvey and others like him.

“We have had huge support from Millwall Football Club and we must thank them hugely for helping Harvey and without them Steve wouldn’t have heard about Harvey.

We can’t wait to go to central London to watch the half marathon and see Steve cross the finish line.”

Around 13,000 other runners will take part in the half-marathon alongside Steve to raise money for good causes.

Anyone who wants to donate to Steve’s fundraiser can do so here https://www.justgiving.com/fundraising/Steve-Rendell1