Steve has raised £6,300 for a rare diseases charity after running the half-marathon in little Harvey's name 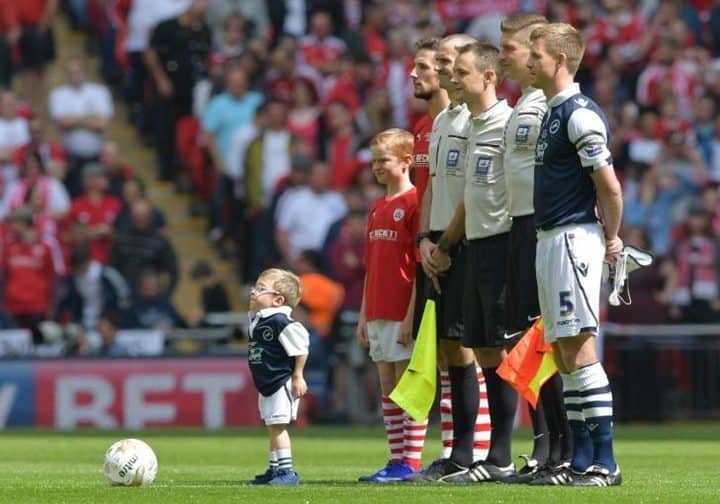 The iconic photo of Harvey Brown as a mascot at Wembley

Millwall superfan Harvey Brown, 10, has said he’s “really proud” of one of the club’s supporters for who ran a half-marathon in his name on Sunday.

Steve Rendell, from Reading, ran the London Landmarks Half Marathon in Harvey’s name on Sunday for the MPS Society.

Harvey has the ultra-rare Morquio syndrome which affects skeletal growth, leaving sufferers with weak bones, a tendency to develop heart disease, and worsened vision and hearing.

Just 78 children in the UK have the condition. The little boy was at the finish line to cheer on Steve during the grueling feat. Steve said: “It’s been overwhelming, I can’t explain it.

“The motivation for me, was Harvey being at the end. It meant a lot.

“I was thinking about him every mile. It meant so much to me, very emotional.”

The half-marathon has raised £6,300 for the MPS Society, which supports those affected by a body of diseases of which Morquio is one.

Speaking prior to the race, Harvey’s doting dad, Dean, said the family was hugely thankful to Steve.

“What Steve is doing means a lot to us as a family,” he said.

“Harvey has such a rare disorder and the MPS Society is such a small charity that we need support like this to help Harvey and others like him.

“We have had huge support from Millwall Football Club and we must thank them hugely for helping Harvey and without them Steve wouldn’t have heard about Harvey.”

Around 13,000 runners also took part in the event, raising an estimated £6million for charity.