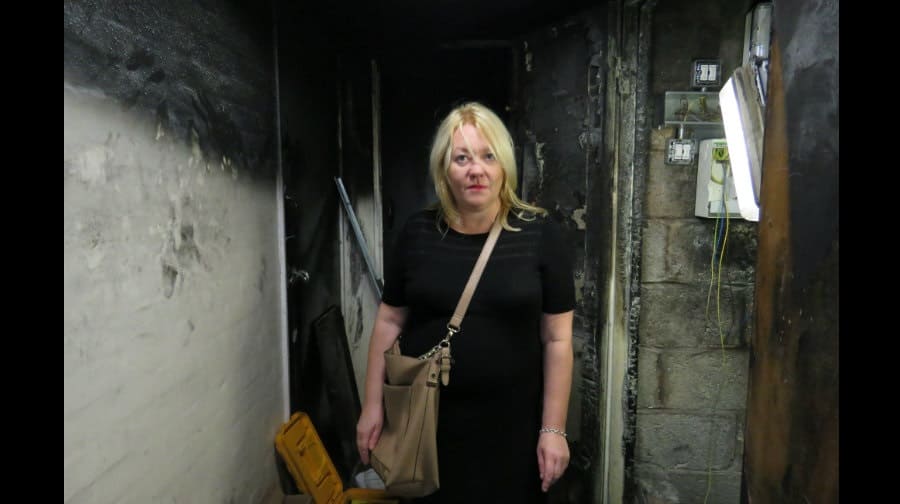 An elderly woman was “lucky” to escape a fire that spread from her estate’s communal electrics cupboard, after residents accused rough sleepers of nicking copper from fuse boxes.

The resident, aged 89, was evacuated from her home in Newman House, Elephant and Castle, at 12.28pm on September 24, and remains in St Thomas’ Hospital due to smoke inhalation.

But Maria Hayes and her partner John Pullen, an electrician, believe the fire got out of control because rough sleepers used a key to get into the estate’s intake cupboard, and stole copper safety components from fuse boxes.

Ms Bottomley’s flat was directly above the intake cupboard, where the floor below was left blackened and with melted white paint dripping down the walls and ceiling.

Maria, 44, told the News: “People were breaking in and taking the copper. It’s why the fire became so intense and dangerous. A UK Power Network representative told us an earth wire had been removed, which is why the fuse protection did not operate.”

Maria added that she had written multiple times to Bermondsey and Old Southwark MP Neil Coyle and Southwark Council leader Peter John to request an intercom security system on the estate.

Newman House in Elephant and Castle

The News was shown an email in which she wrote to the politicians: “We as residents do not feel 100 per cent safe when entering our properties at night because of these homeless people, as many of them are either drunk or have taken drugs.”

The London Fire Brigade confirmed the fire was caused by an electrical fault, but would not comment on whether the condition of the fuse box was a factor.

Maria added that used needles were frequently left around the staircases in the estate, as well as sleeping bags and places where rough sleepers had urinated.

“I have to walk my twelve-year-old son to the bus stop in the mornings now because there have been times when a girl was injecting heroin right in front of him and tried to chase us,” she said.

But after “fifteen years” of putting up with the intruders and repeatedly asking for help, Maria said the council had written to residents saying a new security system could be on its way, after the estate balloted in favour of getting one earlier in the year.

Cabinet member for housing, councillor Stephanie Cryan, said: “I am sure it has been a stressful period for many residents and I sincerely hope [the elderly resident] is recovering well. We are working to sort out her flat so she can return home. Originally the majority of residents voted against the entry phone system, but we have listened to residents and agreed that it was the right thing to do as security is paramount. Following a second ballot, this time where the majority of tenants were in favour of the security measures, we are now installing the entry phones, which I am pleased about. We will continue to talk with residents to ensure we get this right and respond to what they want to happen.”

Recalling the afternoon of the fire, Maria said: “There are no alarms on the estate or anything so no one else knew. My husband called the fire brigade and the ambulance. Imagine if it had happened in the night. It could have been so much more dangerous.”