Stompie the Tank removed from Bermondsey ‘for restoration’

Southwark residents were shocked to see Stompie, the Soviet battle tank that sits on a small patch of land near the Old Kent Road, had been removed on Tuesday (January 4).

Rumours circulated on social media that the tank, which stat at the corner of Page’s Walk and Mandela Way, had been taken away as part of a dispute with the council.

But the truth appears to be more prosaic than that: Stompie has been taken away for restoration, owner Rhys Gray told the News.

When asked what the problem was with the tank, Mr Gray added that there was “currently” no need to worry.

Mr Gray added that he did not know how long the restoration process would take, saying that “it might be a week, it might be two years.”

The T-34 tank was reportedly used to help crush the Prague Spring more than five decades ago. 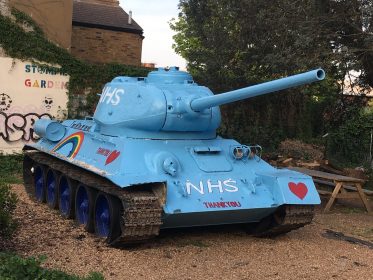 It was purchased by Russell Gray, Rhys Gray’s father. a military enthusiast and developer, as a present.

Long-standing urban legend has it that Mr Gray put the tank on land at the end of Page’s Walk over a planning dispute with the council.

It has been said that he lost a planning decision with the council, so instead placed the tank there – with its guns pointing in the direction of Southwark Council’s former offices in Camberwell.

Stompie is frequently decorated by graffiti artists and was most recently green. In April 2020 the tank was given a blue makeover to thank the NHS staff for their work during the Covid-19 pandemic.

Southwark NewsNewsStompie the Tank removed from Bermondsey ‘for restoration’