Trees and trampolines among the debris sent flying around the borough 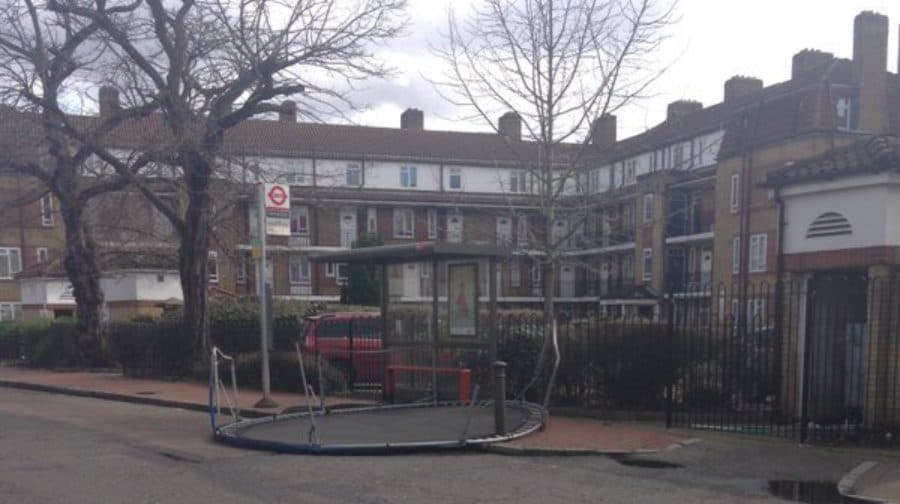 High winds from Storm Katie brought chaos to the borough’s streets, with some commuters being surprised by play equipment in bizarre places and trees crashing into people’s homes, Barney Davis writes.

Eliza Jones took to Twitter to share the extraordinary photo (pictured right)?of a trampoline which had been swept from a near-by garden by the storm and landed upside down at a bus stop in Rotherhithe. She tweeted: “Of all the things I might have expected to see at the bus stop this morning, a trampoline was not one of them.”

The fallen tree was held up by the flats with some people struggling to leave the block and get access to their balconies.

There were no injuries and residents have been told by police that there is no significant structural damage to the building.

Pietro Occhiuzzi, a resident of the tower, was woken up by the sound of the crash at around 3am.

The 32-year-old said: “I got up the next day and saw police tape everywhere and thought there had been a horrible crime.

“I didn’t expect to see a tree nearly inside the building.

“Luckily no-one was injured but if someone was out on their balcony they would have been crushed.

“We thought something like this would happen, the trees from the park are getting too tall you can clearly see they are bigger than the flats.

“They should be kept shorter because their roots don’t go too deep.”

Christel Al Hashmy, 59, also of the affected building, was delighted the tree came down on Sunday night.

“We have had so many problems with the leaves of that tree blocking our drains causing serious flooding in our flats.

“It also blocked our sunlight but now nature has taken it’s course.

“I remember after the last big storm in 1987 all the idiots were coming out to rescue the damaged trees. This is just revenge.”

This morning the silver birch tree was being cut-up and disposed of by maintenance crews from Southwark Council.