String of sex attacks in Bermondsey, Walworth and Peckham could be the same man, say police

Four women targeted over the weekend 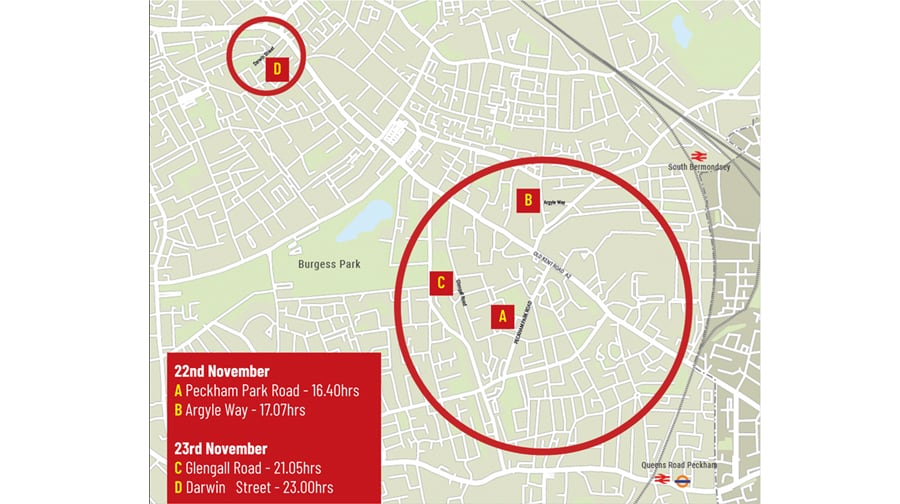 Four women were sexually assaulted last weekend across Southwark in a spate of attacks which police say may have been committed by the same man.

All four took place between Friday afternoon and Saturday night with each victim “touched sexually” by the man, say officers.

The News understands the women were all alone at the time and were attacked from behind. The first victim was targeted at 4.40pm on Friday, November 22, in Peckham Park Road.

Another woman was attacked at 5.07pm the same day, in Bermondsey’s Argyle Way. The News has been told the victim managed to fight off the man after he grabbed her from behind and tried to pin her arms to her side.

The following day, on Saturday, November 23, another woman was attacked in Peckham in Glengall Road at 9.05pm.

Two hours later, at 11pm, a fourth female victim was targeted in Darwin Street between Walworth and Waterloo.

The News understands residents in Darwin Street heard a woman’s screams and rushed to her aid as the attacker was scared off.

At the moment, these crimes are not believed to be linked to a rape in Royal Street on Tuesday, November 12, where a woman was attacked by a stranger outside St Thomas’ Hospital at 1.23am.

Anyone with information about these attacks should contact the police on 101.

This exact type of thing happened to me around 2 years ago outside Bermondsey Station. I was assaulted ‘touched’ from behind whilst my partner was driving to pick me up. The area is still dim-lit and the man that done it to me got away with it (due to CCTV not being investigated amongst other things) but I was told he had a number of things on his record that was similar to what I described.

Police need to take this very seriously and catch people like this as it scares me of what they will go on to do, put up more CCTV to make us women safe and fully investigate.

not a single descrition of the attacker,I wonder why ?

Southwark NewsNewsString of sex attacks in Bermondsey, Walworth and Peckham could be the same man, say police