MP says problems should have been 'wholly obvious' to the council 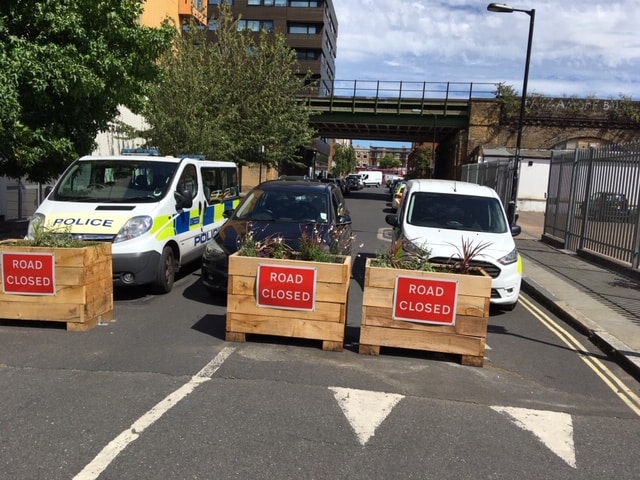 Senior Met officers are in talks with the council amid reports that the controversial new road layout in around Walworth is preventing them chasing suspects, as road are blocked by council installed flowerbeds.

Several residents have reported police cars losing mopeds mid-pursuit as they find themselves blocked off by planters full of geraniums.

As the News has detailed in previous editions, the new road layouts which include whole side streets being blocked off to traffic were put in place as part of a highly contentious plan to reduce air pollution and encourage more people to walk and cycle safely in an effort to prevent further transmission of the Coronavirus.

But the measures – greeted with enthusiasm by cyclists, walkers and commuters – are loved and loathed in equal measure and their rapid implementation has certainly been rocky.

Elephant and Castle church Metropolitan Tabernacle handed Southwark Council a petition of 2,500 signatures against the changes, and traders – including family business Lynne’s Electrical – have also shared their frustrations with the News.

The News is aware of several occasions where police cars, ambulances and other emergency service vehicles struggled to navigate the new layout.

In early July, immediately after the new layout was put in place, Brandon Estate resident Chloe Hill contacted us to describe what she saw near the police station. “Amelia Street was blocked off yesterday using planters, which block the western access in and out of the police yard,” she said.

“There was no road signage in the surrounding area yesterday apart from one sign (Road Ahead Closed) which was on the corner of Amelia Street and Walworth Road. She witnessed a police van trying to turn into the ‘blockade’, an ambulance from Guy’s and St Thomas’ having the same problem, and a council refuse truck, and claimed the drivers had no notice of the changes.

The News understands the issues were serious enough to warrant removing some filters and installing CCTV monitored traffic – at an unknown cost. Superintendent Kris Wright, from the roads and transport command, confirmed the Met had been consulted on the proposals and said a ‘professional dialogue’ between it and the council continues.

In a statement provided to the paper, Wright neither confirmed nor denied that police had complained to Southwark Council that the new layouts had compromised access to Walworth Police Station.

“We are aware of the ongoing road network modifications in the areas surrounding Walworth Police Station,” Superintendent Wright explained.

“There is a process of informing and consulting undertaken by the Local Authority project lead prior to commencement of the works and I can confirm that such consultation did occur, and a professional dialogue continues.

“Whilst any such works can lead to local frustrations and additional complications to policing response in the area, we are working closely with the local authority and roads and transport command to minimise the impact upon local policing activity.

“There is a feedback process in place to allow for real time operational concerns to be raised with the project team.

“The officers are skilled emergency responders and able to adapt to the changing layout whilst these works are undertaken, and obviously any narrowing of access routes can lead to frustrations when stopping mopeds, but this is no different to any alleyway in the  borough, however the safety of local communities and road users remains our utmost priority.

“I am not aware of any specific reports of vehicle pursuits being halted as a result of these new measures, but accept that it may have occurred, which is part of day to day policing.” This paper has also seen a letter from Bermondsey and Old Southwark MP Neil Coyle to Southwark Council’s transport cabinet member, taking Richard Livingstone to task over the implementation of the scheme. In the missive, dated July 27, the Labour MP describing the problems at the station as “a wholly obvious problem to anyone living or working in the area” and says he is “amazed” the council officers who devised the scheme had failed to foresee these difficulties.

After being asked to respond to claims police did not have sufficient notice of the scheme and had been left struggling to navigate the layout, councillor Richard Livingstone responded: “It is silly to claim that the police have not been kept informed about these changes.

“We have been talking with the police both before and during us rolling out the Walworth Low Emissions Neighbourhood measures.

“Indeed, as a result of these conversations, we have changed some of our original planned physical road closures to CCTV monitored traffic filters in order to help them.

“We are in regular contact with the emergency services, including the police, and have committed to continue our work, resolving any problems that they bring to us, where it is possible.”

This is happening all over London.

Total rubbish. There are loads of closed roads in the area which the police navigate around using alternative ways. Keep the road blocks in place. It has slowed down the traffic massively and cut many “rat run” off which is great. It has made the area much safer for residents.

Remove the road blocks short cuts that I use to take to visit friends and family and travel to work have now been cut off forcing me to take longer routes and go into the congestion charge zones. That’s not fair considering the recent price hikes.

They have done this to bird in bush road and there was no warning whatsoever. How is this lowering emissions when I now have to drive 3 roads down and then come back on myself to get to where I need to be???

The usual self-centred and selfish comments from someone who hasn’t considered the effects of such road blocks upon the old or disabled with mobility problems, the need for all emergency services to get quickly to and from an incident in pursuit of their duty. The ability of utility companies to effectively maintain gas, electricity and water and for vendors to efficiently supply food to local communities and the effect upon local employment. Breathtakingly selfish.

This is beyond belief! Southwark Council implements Road closure are chaotic the process not thought out. All under the pretense of controlling pollution and COVID-19 spread. They may as well close off the entire walworth to vehicular movements. You cannot close off sections of roads like that, as drivers drive longer to get to their destination. I also believe that whoever that thought of these nonsense does not leave in the area. Its wicked and very frustrating.

This is the white middle classes pulling around the waggons and pushing up their house prices . Of course they will be free to drive down and pollute other streets. If they want their roads closed then they should not be allowed to own cars because we will still be paying the upkeep of their privatised roads. Lets see what happens when they want their boilers fixed or they want to do house repairs and the contactors cant get through . The only thing is they will also be stuck in the horrendous traffic jams created by their selfishness

They have done the same in Lambeth along Fentiman Road etc . They produced fake photos of the road being full of trucks …I sight I have never seen in the many years I have ben along there. Ironically the houses in Fentiman Road have all sacrificed their front gardens to their cars . So this means all traffic now has to go via the Oval which is already down to one lane due to bike lanes ( empty most of the time ) . With Vauxhall Bridge being closed this is going to be the mother of all traffic jams when everyone get back from their holidays. One day people will look back at this time with disbelief

Bermondsey Beer Mile businesses are lobbying Southwark council to close Druid St too (on weekends) under the pretence of caring about the environment (they really just want to pack in more drinkers mid pandemic). Meanwhile they jam up the road with delivery trucks, on weekdays, idling engines, parking on double yellows and Cllr Livingstone turns a blind eye. Sort it out Southwark!

As usual no consultation with everyone who lives in the borough – just those whose narrative fits.

The Council doesn’t seem to realise that making us drive further and sit in traffic is increasing emissions. The rubbish/recycling collections were late again this week and the operator told me it was because of difficulties getting round the road closures. The continued prohibition on right turns from Manor Place onto Walworth Road and the closures of Amelia Street and Browning Street has led to queues of cars doing U-turns in Amelia Street. And what seems to be ignored is that the reason for the Dale/Cooks Road “rat run” is the ban on right turns from Camberwell New Road to Kennington Park Road even though the road layout seems to have been designed to permit this.

I exited Lytham St junction with Merrow St, normally turn left on Merrow St and exit into Walworth Rd.. now closed off. At the Junction of Merrow St you cannot drive straight ahead… Road closed with bollards erected, you can’t turn right as No Entry road and I could not go backwards several cars queuing behind me…totally stuck. I was forced to make an illegal right turn to get out of my predicament. Days later I get a ticket in the post from LB Southwark and a fine for violating a traffic order. In closing Merrow St onto Walworth Rd but doing nothing to manage the traffic flow along Lytham St, Southwark created an ambush essentially… I’m sure not by coincidence that junction is monitored by a camera that issues fines…Honeypot springs to mind. Truly it is beyond belief that such situations can come about… this is a council run by fools all on a big pay cheque. I am told it’s all for our benefit.. these closures Brough about under emergency legislation to manage Coronavirus I am told in my emails between Cllr Richard Livingstone and myself.

The Council have not thought about anyone who has mobility problems at all. I am a resident who often helps out two elderly neighbours but driving to purchase shopping for myself and them, but now it seems any side road off Walworth Rd has a wretched Planter!!!
How can these have been placed without so much as a letter of intention? its absolutely outrageous!!!! Money that could be spent on other things by the council, has been wasted on this absolute nonsense!
Not everyone can cycle or walk short or long distances, did Southwark council take them into consideration? I think not! which is absolutely disgusting!
All these planters are doing for the Borough, is raising blood pressures, and making more pollution caused by drivers, now driving for longer and sitting in traffic trying to get to their destination. Southwark council this makes absolutely no sense! SORT IT OUT!

Early Bird Catches The Bard For £15