‘Such a kick in the stomach’: Southwark families bereaved in the first lockdown react to Johnson party

'It was a really difficult situation, but there were no exceptions. To find out now that the people who set the rules weren’t following them - I haven’t got the language to say how I feel.'

Southwark families who lost relatives in the first Covid-19 lockdown have reacted with anger to the news of Boris Johnson going to a party in May 2020 – when they were not able to see their loved ones or mark their death properly.

Johnson is facing calls to step down after apologising earlier this week for going to the party in the garden of 10 Downing Street, but claimed that it was technically within the rules.

Families in Southwark whose loved ones died around the same time, but who were not able to be close to them at the end or hold proper funerals, have called Johnson “disgusting” and said the news was “a kick in the stomach”. 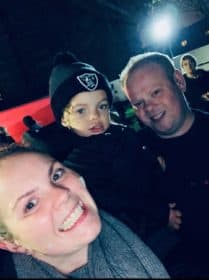 Terry with his sister Toni and nephew Sidney

Bermondsey man Terry Coakley died tragically young, aged just 34, at the start of April 2020 in St Thomas’ Hospital. His family were not able to be with him and hold his hand in his final moments.

In tears Terry’s father David told the News: “All I wanted to do was give him a cuddle. All we had was a picture on the phone of Terry with tubes hanging out of him.”

Discussing Johnson’s behaviour, David added: “If he had called a lockdown six weeks before my Terry might be with us now. I’m not saying would, I’m saying he might have been.”

With reference to the party at Downing Street, David said: “It’s disgusting. Absolutely disgusting. I call him the son of Donald Trump. He was born in America too, not a lot of people know that and he even looks like him. He wants to be a dictator. It’s one rule for him and another for everyone else. He bends the rules to suit him. Bend it like Beckham.” 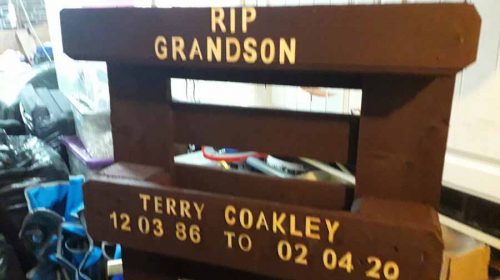 The family were the only ones able to attend Terry’s funeral, on May 11 (just nine days before the Downing Street Party), but 500 people lined the route to his funeral when the procession went past the Blue and Millwall representatives came out. There were two sides of the road lined with people as they approached the crematorium.

Around the same time as Terry died, Andy Shelley, 70, also passed away after falling ill with Covid-19. Living in Amina Way off St James’s Road, Andy and his wife Nora had received their letters from the NHS telling them that because they suffered from certain conditions they were to self-isolate for twelve weeks.

Andy’s daughter Michelle Shelley and her brothers were allowed to see their father for just one hour on the day he died but were all suited up for it. Their mother got to see him twice for an hour. They were not there with him when he passed away.

Discussing the news of Johnson’s party, she said: “It is such a kick in the stomach. It makes me sick to think that while they were giving press conferences and giving out their condolences to the families that lost someone, it actually meant nothing.

“Imagine not being able to hug your mother or  your siblings at my Dad’s funeral. And we didn’t because we were obeying the rules, but Boris and his mob can do whatever they please. Heartbreaking.” 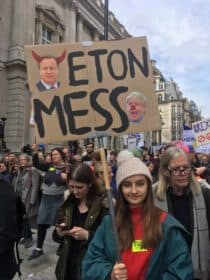 Ruby Fuller on an anti-Brexit march

Emma Jones’ daughter Ruby Fuller, who went to North Dulwich Charter School, died of leukaemia aged just eighteen in May 2020, but the lockdown rules still meant that they were unable to have a proper funeral.

Addressing the Downing Street party, she said: “That was the most frustrating thing, it was a really difficult situation, but there were no exceptions. To find out now that the people who set the rules weren’t following them – I haven’t got the language to say how I feel.

“It makes me feel a bit stupid for following these rules. Maybe it wasn’t that important after all…

She added that she had “no respect” for Johnson and that that “we deserve better as a country”.

“We deserve leaders who are going to lead by example. The fact he was trying to get out of it on a technicality… No, come on, you’ve basically been caught red-handed.

“Boris has apologised but the way he has couched that apology, it felt like he was trying to say I didn’t really do anything wrong. I don’t think it’s tenable to have a leader who has been found to be breaking the rules. How can anyone ever follow any instructions again?” 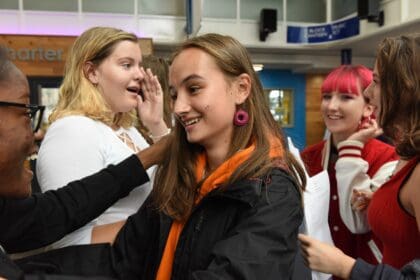 Ruby, when she received her GCSE results in 2018
Photo: Tom Parkes

Ruby, a keen advocate causes like the environment, remaining in the EU, refugee rights and animal rights, among others, “would be furious” herself over the Johnson party news, Emma said.

“She would be fuming. I saw a picture of some chap standing with a banner outside Downing Street saying ‘this is not a party’. That would be Ruby.”

At the time of Ruby’s death, they put up flowers and cards in their front garden for people to sign, along with a banner with Ruby’s motto: “Live kindly, live loudly.”

“Ruby was very organised about telling me what she wanted when she died,” Emma said. “You can imagine how excruciating it was to be told that by your child.”

Ruby’s family, friends and school have done several fundraising events for research into leukaemia. You can donate and read more here.

Southwark NewsNews‘Such a kick in the stomach’: Southwark families bereaved in the first lockdown react to Johnson party