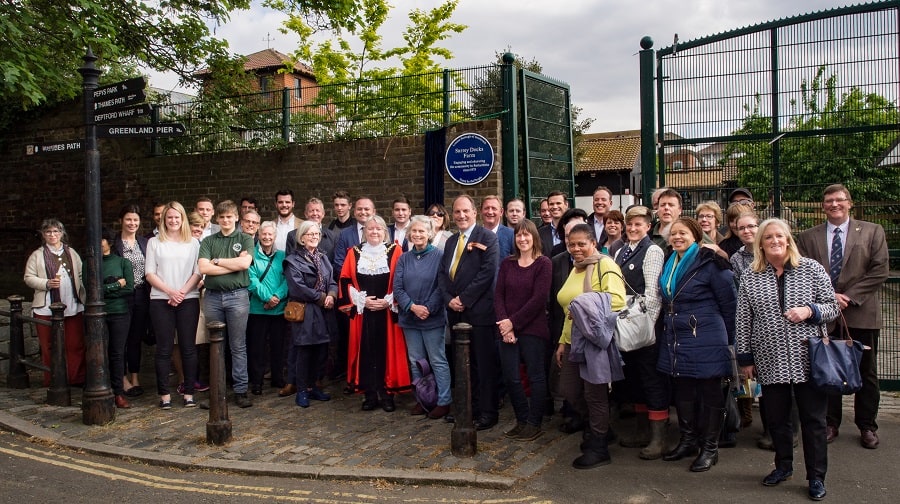 A blue plaque celebrating the heritage of Surrey Docks Farm was unveiled this week.

The plaque was voted for by Southwark residents and awarded to the farm by Southwark Heritage Association in recognition of over 40 years of running a city farm open to the public seven days a week.

It was unveiled by the Mayor of Southwark, Cllr Kath Whittam, at the farm in Rotherhithe Street on Tuesday, May 9. The Mayor also officially opened the recently-completed improvements at the farm.

The £84,000 project has improved the western side of the site.

A muckheap, which previously prevented visitors from walking around this side of the site, has been re-sited and upgraded by adding a new concrete base and drainage.

A circular access path with an education trail has also been created around the fields.

Worn-out fencing and gates have been replaced and a new gate is being installed to allow easy access for gardeners collecting manure for their allotments.

A new pig house has also been built, which has viewing windows and a concrete base and provides a better environment for sows giving birth and looking after their young.

It will also benefit volunteers and trainees with disabilities working with the pigs and enable schoolchildren and other visitors to view the animals.

Funding for the improvements came from The Veolia Environmental Trust who awarded a grant of £61,245 through the Landfill Communities Fund, and the London Borough of Southwark, which contributed £12,695.

The farm made up the shortfall through donations made by Lusso, the Worshipful Company of Farmers and generous individuals and visitors to the farm.

Farm manager Gemma Hooper said: “We are delighted to see our plans come to life thanks to the generosity of all our funders. Major new improvements – good for our next 40 years – have been made to our western site and a whole new area of interest opened up for the public.

“We look forward to seeing our members and visitors exploring these new features and engaging with an education trail that changes with the seasons.”

The blue plaques scheme is run by Southwark Heritage Association and the News.