Callum Willis, who is a vegetarian, was left 'disgusted and shocked' by the meat inside his supposedly meat-free snack 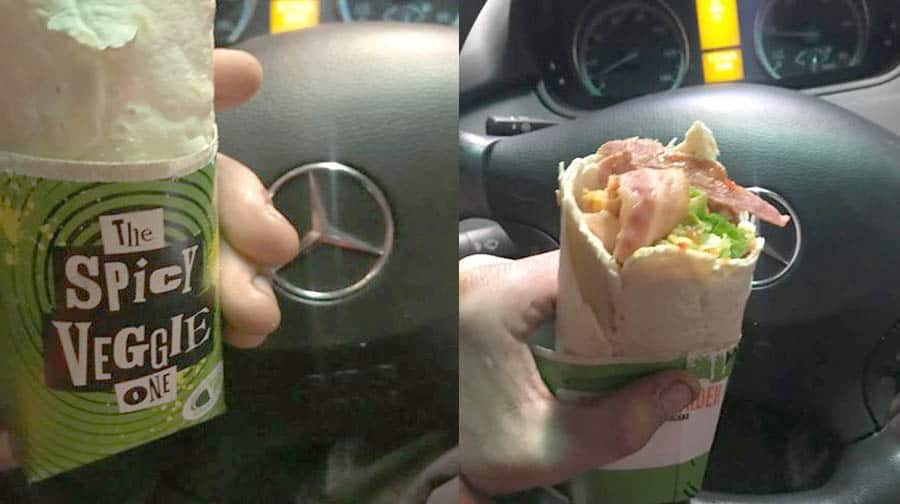 A Deptford McDonald’s customer was left “disgusted and shocked” after discovering his ‘vegetarian’ wrap contained bacon.

Callum Willis, who is vegetarian, ordered the Spicy Veggie Wrap, which should not contain any meat, from the branch’s drive-thru on Monday afternoon – only to uncover a rasher of bacon inside.

The mechanical engineer has since lodged a complaint with the Bestwood retail park branch over the inaccurate order.

He told the News: “I felt disgusted and shocked that there was bacon in there. And I just don’t feel the way [they] responded was acceptable.

“It seems like they tried to brush it under the carpet. I have [had] no response from the direct manager, only the head office.” In a response to his complaint, a McDonald’s customer services official told Mr Willis that the company places “great emphasis on order accuracy as there is a growing demand for personal preference albeit for dietary or religious reasons.”

He added: “I can only imagine how this has made you feel, please accept my sincere apologies.”

The branch offered him a £15 voucher to use towards a future meal and “to say sorry we didn’t meet up to your expectations.”

However, Mr Willis, 28, who was visiting the branch on the way home to Corringham in Essex, said the fast-food giant’s response has not been acceptable.

“An ideal response from McDonald’s would be an apology from the store manager, but they haven’t contacted me at all,” he said. When contacted for comment by the News, a McDonald’s spokesperson said: “We absolutely recognise that it is not acceptable to serve meat when our vegetarian product has been ordered, and we would like to apologise to any customer who has experienced this.

“We would also like to reassure that we have a number of procedures in place to avoid inaccurate orders, and that, after we saw that mistakes were being made, we introduced a number of additional measures in our kitchens and communicated with all stores to reduce inaccuracies quickly and effectively.

“The policy changes had led to more accurate orders,” said the spokesperson, but he added: “We are disappointed that mistakes are still being made.”