'I really can’t pay for the new windows at the moment, I’m just trying to survive,' he said 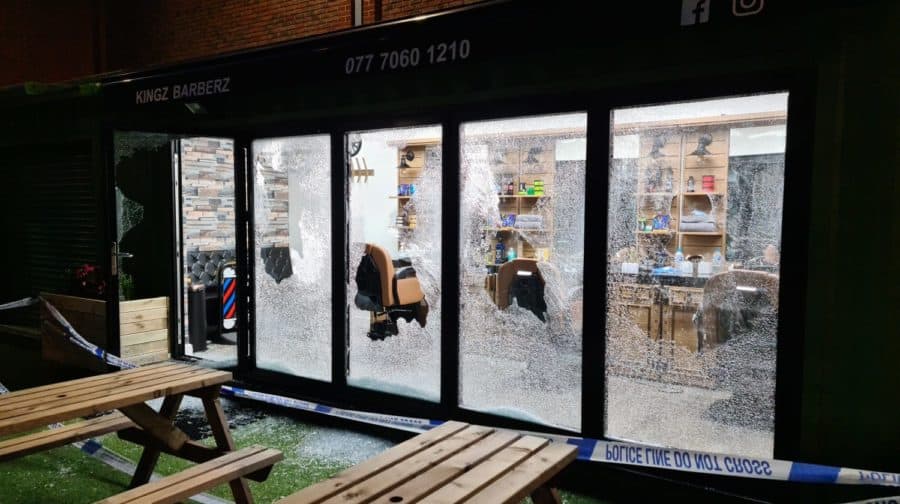 A man who opened a barber’s shop in the Surrey Quays shopping centre earlier this month was forced to leave his daughter’s side in hospital after learning that all the shop’s windows had been smashed.

Ibo, who was excited to launch Kingz Barberz by the Surrey Quays Tesco on July 8, said he was “upset” by the incident, which is going to cost him more than £6,000 to repair without insurance.

He had been waiting with his ten-year-old daughter in hospital on Friday night as she waited for surgery on her broken hand, when he got a call from the police telling him that he needed to come to the barber’s to secure the property.

“The police called me around 3.30-4am and told me I have to go to my place,” he said. “I said I could not, I am with my daughter, but they said I had to come and secure the place. All the windows have been broken – you have been attacked.

“The police stayed at the place until I got there, because it took some time to convince my daughter that I had to go. I got there and the windows were smashed.”

Ibo then spent hours in the shop sweeping up the broken glass and boarding up the caved-in windows – and miraculously was able to open later that afternoon.

He said he thought someone was trying to send him a message with the attack, because nothing was taken from inside the shop.

“It was so difficult to open a business anyway with Covid, and we want to make it friendly, and a great environment for everyone.

“Some people are obviously just coming with a lot of hate, out of jealousy, out of what I don’t know. I think they tried to get us to close down, maybe have no trade for the school holiday [which starts this Friday July 23].

“It’s also the Eid celebration for the Muslim community this week. Muslims normally try to get fresher for this day. Anyway, someone is trying to slow us down, stop us earning. We will not let them win.”

Despite working hard to reopen on the same day as the attack, Ibo said he is still intimidated by what happened.

“I do feel upset now.There’s just an uncomfortable feeling you have after that.

“But we have done nothing to anyone. We are friendly to everyone, and we’ve been welcomed by so many people.

The bill to repair the windows, which were custom-made, will come to nearly £6,300, Ibo said. He does not have the money to fix them at the moment, with the business only starting less than two weeks ago. He had not insured the shop before the attack, as he had not bought all of the items he wanted coverage for, so he will have to foot the bill.

“I really can’t pay for the new windows at the moment, I’m just trying to survive. Even the cost of my staff is tough,” he said.

Although he was not by her side, Ibo said he was relieved that the operation on his daughter’s hand went smoothly.

A Met Police spokesman said: “Police are investigating an allegation of criminal damage relating to a barbers in Surrey Quays Shopping Centre after a number of windows were smashed at approximately 02:45hrs on Saturday, 17 July.

Anyone with information that could assist is asked to contact police on 101 or tweet @MetCC and quote CAD1048/17July.