"My brother would have been in a grave now, if it wasn’t for that police officer" 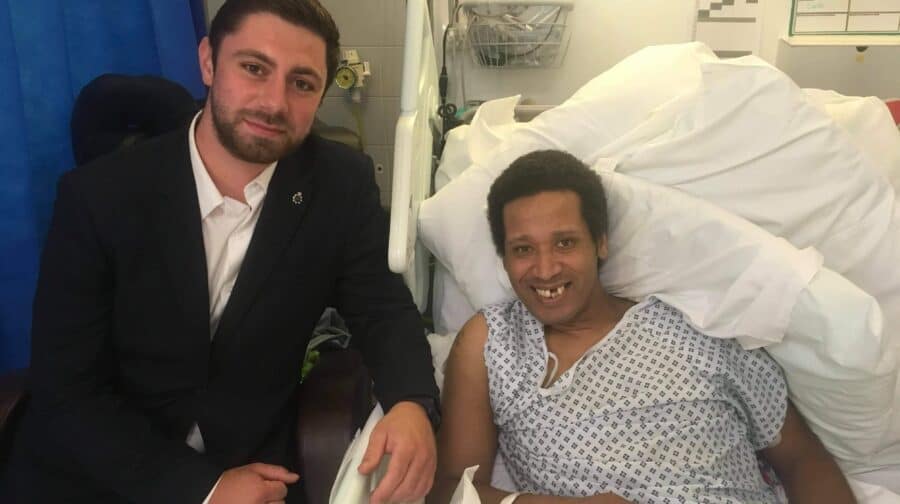 A construction worker who nearly died after collapsing in Surrey Quays will celebrate his birthday this week – thanks to a hero copper who spent 23 minutes performing CPR on him.

Rui Andrade began to feel chest pains while painting a wall on June 7, and walked out to get some fresh air.

But he suddenly fell to the ground suffering a severe heart attack, when two police officers on patrol noticed him and rushed over to help.

One of them began performing CPR, not stopping for a lengthy 23 minutes, even though it appeared that he may have died. Usually after fifteen minutes of CPR the chances of someone recovering are extremely slim.

His grateful family invited the hero copper, PC Mitchell Howton, to King’s College Hospital to share a slice of birthday cake with the man whose life he saved.

“My brother would have been in a grave now, if it wasn’t for that police officer,” she told the News.

“On Wednesday, we wouldn’t have Rui’s 36th birthday to celebrate.

“The medics thought he was going to die, and the doctors said he had no chance of survival.

“PC Howton could’ve stopped giving CPR at any point, but he didn’t, and giving CPR for 23 minutes takes a lot.”

Rui, who has a teenage son, was in a coma for two weeks after the near fatal heart attack. Against all the odds, he is now talking and eating again. The pair had a video call with Rui’s son, who told the officer that he had saved his dad’s life

He has met the police constable whose CPR meant he could be revived in an emotional bed-side reunion.

“We couldn’t believe it,” said Miriam. “He told the police officer: ‘My son has a dad today because of you.’

“My brother beat the odds. He’s talking and eating again, he’s not walking yet but that will come in time.

“It’s my brother’s birthday on Wednesday, and we’ve invited him to come to the hospital for a slice of cake. They’ve now become friends.

“There were times when we were ready to give up, but PC Howton said to me, ‘don’t worry, your brother will make it.’

“I don’t have the words to tell you really.”

However, the modest Peckham-based copper said: “Our goal is to protect everyone and the communities we serve.

“If someone is found ill like that and if we know how to do it, there’s no reason why we shouldn’t step in to save a good man’s life.” PC Howton, who has been on the force for two years, has now become friends with Rui and the family, and will pay him a visit on his birthday.

“This is a unique friendship really,” he said. “It was so amazing to meet him, he was so thankful, it was really emotional.

“It’s a proud moment for me to hear that my actions may have saved his life.”

When the 22-year-old officer paid a visit to Rui, they jointly video-called his young son, who lives in Portugal.

“That’s when it really hit home,” said PC Howton. “When you have a thirteen-year-old boy saying: ‘Thank you for saving my dad’s life.’”