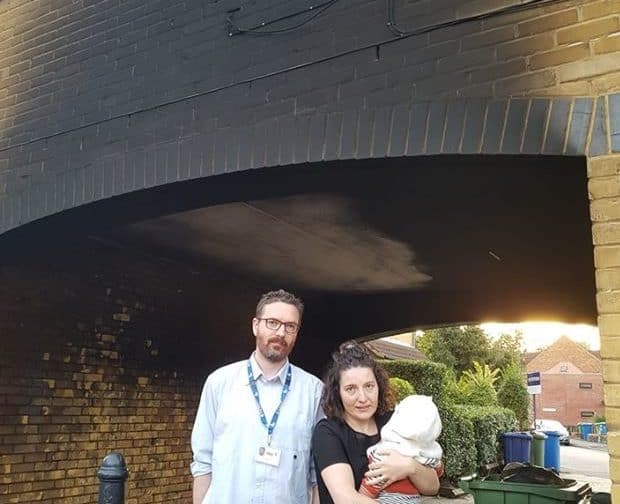 Couple George and Marialouisa pictured outside their burned flat

Worried residents of a Surrey Quays block of flats have told of their panic at having to escape a late-night blaze from the bins underneath their home.

The flames of the October 2 fire, on Steers Way, reached up to the second floor of the complex – where a mother and father were sleeping with a seven-month-old baby inside shortly before 2am.

Rubbish and bins are kept on either side of an archway underneath the flats, which forms part of a thoroughfare. Residents suspect that the fire was deliberately started, but this could not be confirmed by the Fire Brigade.

Now they have called for the bins and rubbish to be moved, saying it is not the first time they have caught or been set alight underneath their homes.

“One side of the archway was completely gone and burning when I got outside,” said George, who lives in one of the flats alongside partner Marialouisa and and their seven month old son.

“My concern is that we only have one exit and entrance to the flats.

“If it is arson, I’m just hopeful they didn’t know that there was a pregnant woman and a baby inside those flats.”

Three years ago a similar fire also occurred in the archway, said George, a teacher, leaving his partner unable to sleep for a month.

“They did both sides of bins that time so both sides of the archway went up,” he said. “But it was as bad this time because of all the mattresses and rubbish down there.”

Firefighters pictured on the scene

Also affected was heavily pregnant Elmas Lushka, who lives in the flat below with her partner, Rasim.

“It was very frightening, we were out there until 3am. We couldn’t sleep because we were so afraid,” said the beauty salon manager who is 32 weeks pregnant.

“No-one has come to clean it up [the rubbish] it’s still there.”

Near to the bins are a gas meter, said Ms Lushka, adding: “If the flames had reached the gas meter, there would have been an explosion.”

“It’s completely unacceptable because it’s unsafe where the bins go,” she said.

A London Fire Brigade spokesperson said: “We were called at 0141 on October 2 to bins alight in Steers Way, SE16. The fire was under control at 0210. Two fire engines attended the scene.”

Surrey Docks ward councillor, Nick Johnson, who visited the affected families alongside fellow councillor, Jane Salmon, said he would be working with council officers to see how the underpass could be redesigned to prevent rubbish being dumped there.

“We are going to work with council officers to make sure that people can’t put stuff in that underpass,” he said, adding a call for the rubbish to be swiftly cleaned and bins reissued.

However a council spokesperson told the News that it had no power over rubbish deposited underneath the flats as it was privately owned land.

It is not clear whom the landowner for the building is, residents told the News.