10-15 per cent of patients have never smoked 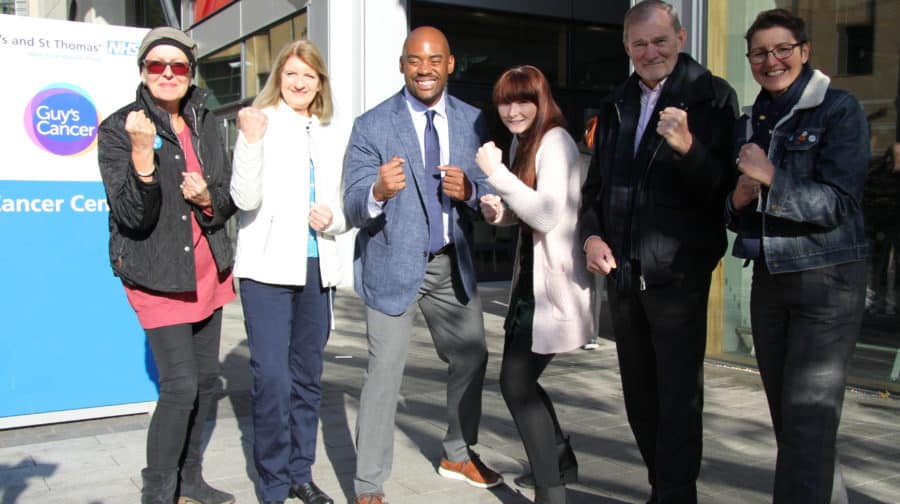 An ex-NFL player who set up a lung cancer charity after the death of his 38-year-old wife has visited Guy’s Hospital to help raise awareness that the disease doesn’t just affect smokers.

Chris Draft, who who played for the San Fransico 49ers and the Atlanta Falcons, visited Guy’s Cancer Centre last week.

He founded the charity Team Draft after the death of his 38-year-old wife Keasha, who had never smoked.

Team Draft is dedicated to raising awareness of the signs and symptoms of lung cancer, and highlighting the misconception that it is only a “smokers’ disease”.

He said: “It’s great to get people to stop smoking. It’s great that we have cleaner air and it’s great that we improve environmental areas and spaces. But we do need earlier detection, better research and focus on survivorship and this is a new message.

“There is a darkness around this disease. The darkness is the lack of information and knowledge that comes with understanding that the campaign of prevention is not enough.”

Rachel Thomas, a lung cancer clinical nurse specialist at Guy’s and St Thomas’, said: “One of the major issues is that the public perception is that you only get lung cancer if you smoke but actually 10-15 per cent of patients will have never smoked in their life and be very young.

“In the field of lung cancer, treatment has massively improved.

“Lung cancer carries huge stigma which needs to be broken down and the public need to know about this huge risk to health.

“We need to tell people the signs and symptoms of lung cancer so if people are concerned they then ask their GP for an X-ray.” Faye, who was diagnosed at 28

Thirty-one-year-old Faye Wrotchford, from Lewisham, was one of the patients to meet Chris.

A non-smoker, she was diagnosed at 28 after experiencing back pain and a stubborn cough.

She said of her diagnosis: “I don’t blame my GP at all because who would think a 28-year-old would have lung cancer?

“I was training to be a midwife and working in a bar in the evening so I thought the back pain was to do with twisting and lifting.

“It was wonderful to have Chris here today. He is very compelling and we have learnt a lot and it means that our voices are getting heard.

“I’m very lucky to be part of this today and hopefully I can go away and do my little bit, so people around me can start to learn the signs and symptoms of lung cancer.

“Hopefully they go on to say: ‘My friend Faye was 28 when she was diagnosed with lung cancer and she was never a smoker.’ That’s how you get the message to spread.”

Symptoms of lung cancer include