Tanks to the NHS! Iconic Bermondsey tank given makeover to thank nurses and doctors 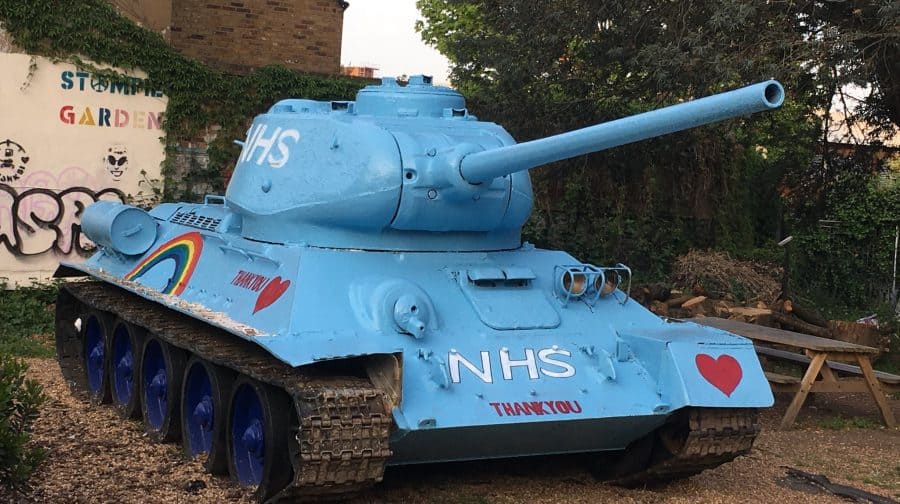 An iconic former Soviet battle tank in Bermondsey has been given a blue makeover to thank the NHS.

The tank, frequently decorated by graffiti artists, has been turned the shade in honour of the National Health Service.

Alongside the striking colour, an unknown artist has also emblazoned: “NHS – Thank You’, alongside a rainbow.

The rainbow has become the symbol of the NHS during the coronavirus crisis, with schoolchildren across the country putting a rainbow symbol in their windows to thank heroic nurses and doctors.

The striking tribute was noticed by former Bermondsey and Southwark MP, Sir Simon Hughes. “Joining the support for the NHS in London SE1 this week a slightly unexpected new supporter,” he said.

“But of course all are welcome. Thank you NHS, carers, medical scientists & key workers everywhere.”

The tank was reportedly used to help crush the Prague Spring more than five decades ago.

It was purchased by Russell Gray, a military enthusiast and developer, as a present for his son.

Long-standing urban legend has it that Mr Gray put the tank on land at the end of Page’s Walk over a planning dispute with the council.

It has been said that he lost a planning decision with the council, so instead placed the tank there – with its guns pointing in the direction of Southwark Council.

Southwark NewsNewsTanks to the NHS! Iconic Bermondsey tank given makeover to thank nurses and doctors