The party included live musical entertainment, cakes based on recipes from the 1920s and 1930s, plenty of tea and even a drop of wine 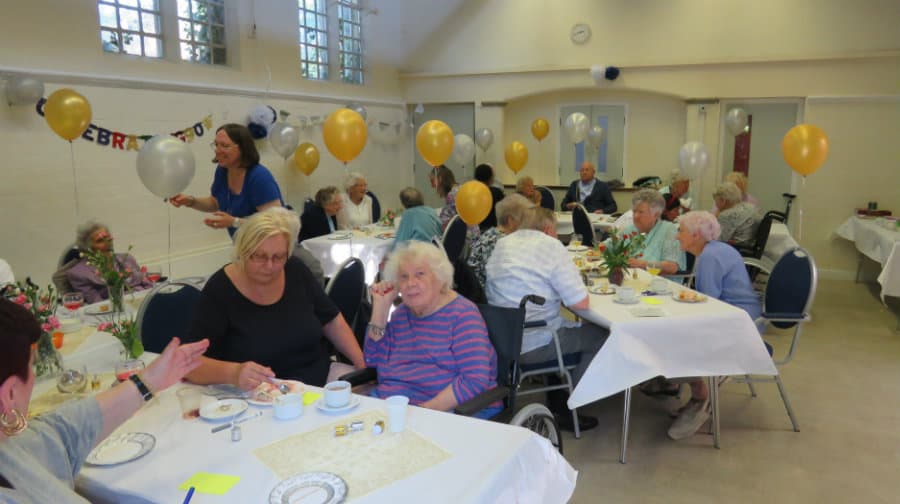 Dozens of people over the age of 90 enjoyed a special tea party on Monday at the Time & Talents community charity.

The party included live musical entertainment, cakes based on recipes from the 1920s and 1930s, plenty of tea and even a drop of wine.

Some of the party-goers still work, drive and one 98-year-old woman took a trip on a speedboat last year.

Lifelong Rotherhithe resident Sarah Strout, 94, said: “I’m not too bothered about my age, I get up and keep looking after myself.”

Cathy Martin, 90, said: “The event is lovely, it’s just nice to socialise with all these people.”

Time & Talents created the event to appreciate the contributions of the elderly and to help them socialise, which many of them find difficult.

Director of Time and Talents Alex Evans said: “We realised what incredible stories they have, and we wanted to say thank you and show how much appreciation we have for them.  It was about giving something back.”

The charity was founded in 1887, and runs targeted projects for people with high levels of need, such as isolated elderly people.

Volunteer Rochelle Gage said: “They don’t really get out too much, it’s nice that they have time to come out.”

The event follows the 90th birthday of the Queen in May, and although Her Majesty was unable to attend the event, a cut out mask of her face was passed around for any takers to wear.

Time & Talents group facilitator Cindy Glover said: “I think it’s affirming their resilience, and their ability to carry on, have a good time and it’s really important that we really appreciate them.

“It’s also to show that there is life after retirement and after 90.”

Time & Talents runs a befriending service for isolated older people, a gardening club and a club for people recovering from strokes and their carers.

The first trip that Eileen O’Sullivan made outside of London was to Blackpool in 1942 to help build Vickers Wellington bombers.

Eileen, 92, was told to go to Blackpool to help spray the linen wings of the bomber with dope, (a type of lacquer), which formed the outer skin of the aircraft.

Originally from Bermondsey, Eileen had never even heard of Blackpool before she was sent there.

Eileen said: “People just didn’t used to travel back then like people do know.

“It was quite scary, but a bit exciting to be sent there. They gave us a pint of milk every day too.”

Eileen was married to her husband William for 54 years, who was part of the D-Day landings in Normandy.

In between gardening and seeing her five great grand-children Eileen visits the Time & Talents centre once a week.

She said: “I think it’s a very nice idea to get all these people together, and when you get my age it can be a bit lonely.”

Eileen remembers clearly the Blitz targeting the Surrey Docks in 1940, when bombs were strapped to oil drums in an attempt to burn the timber ponds.

“The sky was just black with thick smoke. It was a scary time.”

Rita Pezzani still works at Harrods’ food hall at the grand age of 90.

Rita, from Peckham, told the News that she works two days a week at the prestigious Knightsbridge department store.

Her husband of 64 years Mario, 96, whose family are from Northern Italy, keep himself busy and still drives around London.

The couple met in their teens at a house party and went on to run an Italian restaurant in Islington called Marita, a combination of their two names.

Mario went to school in Italy, and when he came back to London he couldn’t speak a word of English.

At the Time & Talents event the guests were asked what advice they would give to their ten-year-old self.

Mario said to always obey your parents and Rita advised: “You have got to be happy and respectful.”

The pair still visit Mario’s home town once a year, and are proud great-grand-parents to six great grand-children.

Mario said: “To be honest with you, it doesn’t feel any different being this age.

“Apart from my legs I’ve got no problems, I’m still all here mentally.

“My mother lived to 104, she could remember Queen Victoria’s funeral.”

Despite being the oldest person in the room, you’d never have guessed it speaking to Gladys Williams.

Gladys, 98, went on a speedboat last year as part of a day trip and described it as great fun.

Originally from Peckham, Gladys was six-months-old when the First World War finished and can clearly remember the Second World War.

Her father Bertie was a driver in the First World War, and Gladys was five-years-old when he passed away.

Gladys said she didn’t have any secrets for reaching the age of 98, but reckons her love of swimming probably helped.

The former insurance worker said: “It’s probably in my genes, my cousin lived until they were 101.”

Reminiscing about the Second World War, Gladys said: “Some days it was scary. We just got on with it.

“One time a bomb hit our house and it blew the roof right off.”

Since being born in 1918, Gladys has seen a lot of changes in the world.

Gladys said: “We didn’t have all the electric things when I was younger, we had to do everything by hand.” 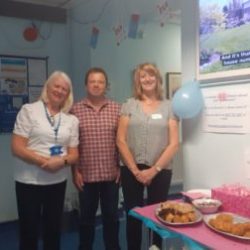 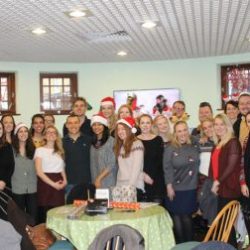