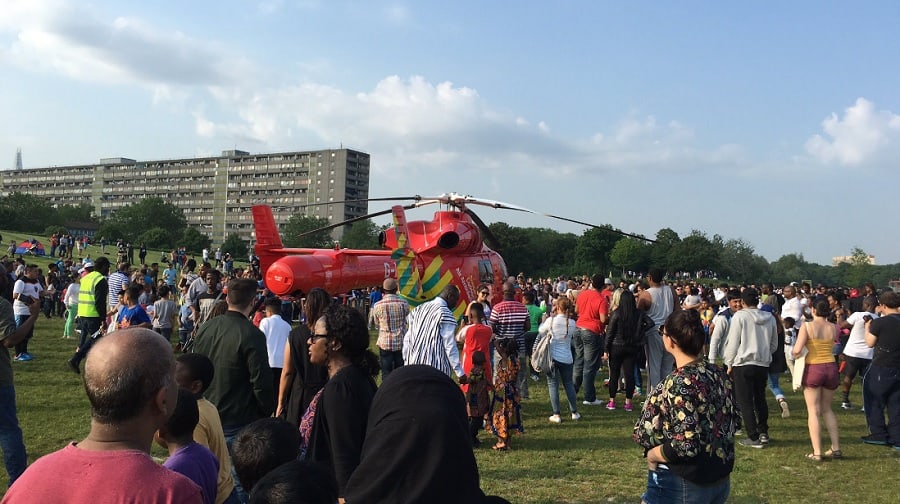 A teenage boy was rushed to hospital yesterday evening after reports that a knife fight took place at Burgess Park funfair.

Police have said they were called at 6pm to reports of a stabbing incident.

The boy, aged fifteen, was treated at the scene by London Ambulance Service and taken to a south London hospital with his family.

A spokesman for the Met Police has now told the News that the boy’s condition is “stable but still serious”.

No arrests have yet been made and their enquiries continue.

The ‘George Irvin’s Ultimate Funfair’ event was running for its final day at the park since opening on May 27.

Faraday ward councillor Samantha Jury-Dada tweeted saying: “Saw families enjoying the last day of the funfair at Burgess park and then someone just got stabbed in front of us all. This has to stop.”

Saw families enjoying the last day of the funfair at Burgess park and then someone just got stabbed in front of us all. This has to stop.

Cllr Jury-Dada described seeing a group of males chasing the boy shortly after a ride had finished.

“My friend and I saw it take place while I we were queuing for one of the rides. It happened very quickly,” she said.

“But it was so worrying to think that these males were running through a crowded place with lots of children while holding a weapon.

“My friend was the first person to call the police as people crowded around the victim or watched as though this were a normal scene.

“My friend had to describe to the ambulance service what kind of condition he was in and what his wounds were like so that they could give the victim the right response.

“There was no police presence at the fair. I know they are extremely pushed with central government cuts to numbers of officers, but it was such a busy event in an area where we know there are problems with knives a more visible presence would have been welcome.

“The police took about ten minutes to arrive, which felt long especially as we have Walworth Road Police Station so close by.

“The ambulance service did an amazing job and so did the air ambulance, which is funded by charitable donations.

“There was paramedics who came to help from an event that was going on at the BMX track.

“Of course, my thoughts go out to the victim and his family and I hope we can learn from this incident so that this doesn’t happen at future family events in the area”

When are these stabbings going to stop. Stop knife crime now. Families will be to frightened to take their children out. Is nowhere safe anymore ?. Every day we are reading about yet another stabbing. They obviously went to the fair armed, with intention of doing someone some harm, what do we need, metal detectors on park gates now. Beggars belief.

Immigration is the problem. Repatriation the answer.