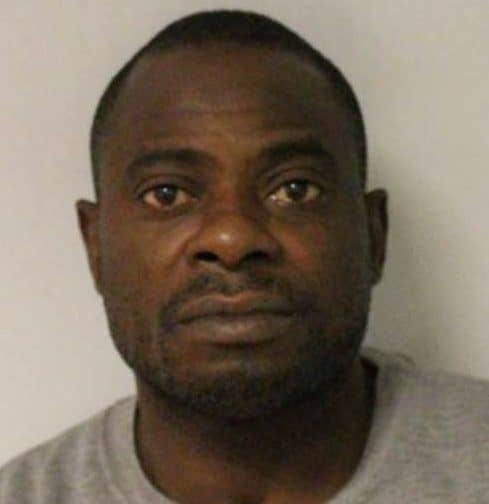 An image of Eleas Alfa Patience Godwin, circulated by police in an appeal to trace him after the reported attack. He was later arrested.

A homeless man who raped a teenage girl in the grounds of the Imperial War Museum while on bail for two previous alleged sex assaults is facing jail.

Eleas Alpha Patience Godwin, 45, attacked the seventeen-year-old as she took a shortcut through the Tibetan Peace Garden after a night out with friends in the early hours of October 15, 2019.

The terrified teenager ‘thought that was it’ as her ears rang and her vision ‘started to go white,’ after he hit her head on the ground and throttled her, jurors at Inner London Crown Court heard.

Godwin denied rape but was convicted by a jury. At the time of the attack he had been released on bail for two separate alleged sex assaults earlier in 2019.

He was said to have groped a woman on a bus in May that year and assaulted another woman in June at St Martin’s homeless hostel.

Christopher Amis, prosecuting, said Godwin was wearing a hooded top when he approached the girl as she walked through Tibetan Garden outside the museum.

“It was very dark, he said ‘hello’ and then he immediately attacked her, she thinks from behind.

“She described him grabbing her by the shoulders and dragging her a few metres away to a slightly less obvious area and throwing or getting her to the ground.”

He continued: “He said at one stage “stay down or I’ll kill you,” she thinks he banged her head three or four times.

“She tried to kick or punch him but found nothing worked, he was far too strong for her.

“He is a well built and burly or strong man, her fingernails were bitten so she couldn’t even scratch him.

“She remembers screaming momentarily, that was when the defendant started to strangle her.

“He had hands around her neck as she lay on the ground and was squeezing her very hard indeed, so much so she struggled to breathe.

“It all started to go white as she lost or began to lose consciousness.”

During the rape the victim was unable to scream due to the strangulation and she later told police: “He was on top of me, I thought he’s going to kill me, I actually thought that was it.”

Mr Amis told jurors: “The defendant accepts, now, that he had sexual intercourse with this young woman in the grounds of the museum in the early hours of that morning.

“But he claims now that it was with her consent and that he reasonably believed that she was consenting.”

After the attack, the victim made her way home in shock, eventually telling her mother and the police what had happened the next day.

Godwin, of no fixed address, was first due to be tried in April 2020, but the trial was abandoned after concerns were raised about his mental health.

He denied but was convicted of rape, assault by beating and assault causing actual bodily harm and was remanded in custody ahead of sentencing on June 29.

Detective Constable Stephanie Agass, said: “I would like to commend the woman in this case for her courage throughout the investigation. I would always encourage anyone who has been the victim of a sexual assault to come forward and speak with officers so that we can offer support.”

'The world is a safer place': Sarah Everard's family describe 'relief' as her killer is given whole-life sentence