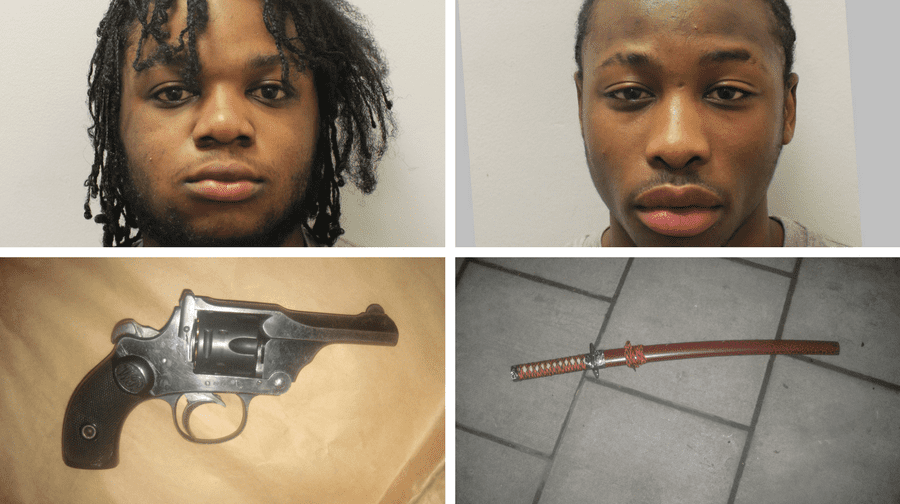 A pair of teenagers have been jailed after being caught with a loaded gun and samurai sword in Camberwell.

Mucktar Khan, aged nineteen, and Joshua Eduardo, aged eighteen, were found with the weapons when armed police pulled over the taxi they were travelling in on Albany Road, Camberwell, shortly after 1am on February 15.

Eduardo was found in possession of a bag containing a loaded revolver which was fully cocked. Two rounds of the firearm appeared to have been fired.

He also had a samurai sword, which he tried to hide down his trouser leg as the vehicle was stopped by police.

When searched, Khan was found to be wearing ballistic body armour and had a balaclava.

The firearm was examined at the Met’s Firearms Forensics Unit and was identified as a Hinge Frame Webley Revolver of .32 calibre.

Khan, of Tavy Close, Kennington, was convicted of possession of a firearm and possession of an offensive weapon in a public place following a week-long trial at Inner London Crown Court.

He was sentenced to six years’ imprisonment on Friday, February 9.

Eduardo, of Kennington Park Road, Vauxhall, pleaded guilty to the same charges at an earlier hearing. He was sentenced to three years and six months’ imprisonment.

Khan was also found guilty of a Section 49 Regulation of Investigatory Powers Act offence after he failed to disclose a PIN number for a mobile phone.

Detective Constable Martin Reader, from the Met’s Trident and Area Crime Command, said: “As the result of a proactive, intelligence-led operation these two men were caught in possession of two lethal weapons.

“Trident detectives work tirelessly to remove illegal firearms and knives from the streets of London.

“The lengthy custodial sentences handed to these two defendants reflect the potentially fatal consequences of possessing a loaded gun and a samurai sword in a public place.”

Both defendants were found not guilty of possession of a firearm with intent to endanger life.