Catching a common cold could be fatal for little J'ssiah Brown 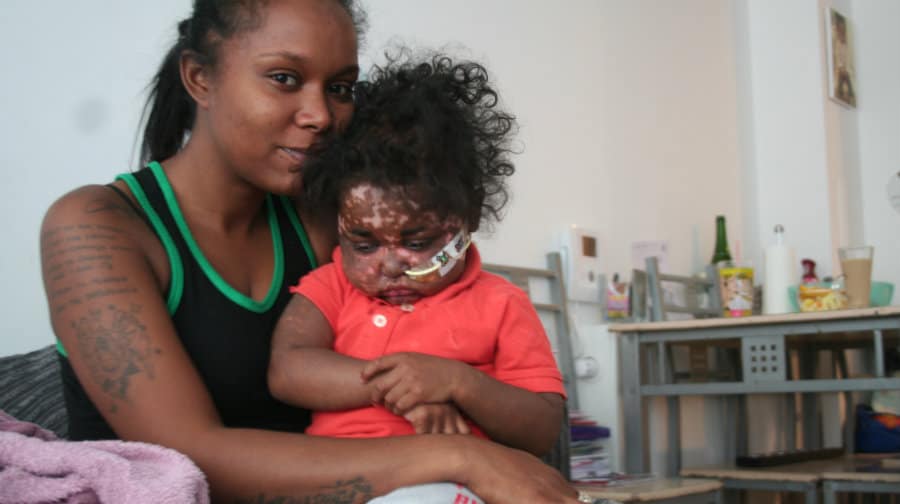 Jeanene with J'ssiah, who is battling a rare form of Leukemia

The mother of a terminally ill toddler has said having no hot water in their home for nine months could have killed her son.

Three-year-old J’ssiah Brown was just one when he was diagnosed with Acute Myeloid Leukemia. He was put on steroids, underwent intensive chemotherapy treatment and had a bone marrow transplant from his older brother. Despite a temporary recovery, he relapsed in December and by March his illness was classed as terminal and he was given months to live.

After being moved out of temporary housing in Croydon where J’ssiah had contracted pneumonia, into a brand new property in Camberwell in January, mum Jeanene Fraser thought all her dreams had come true. Finally she had a specially adapted flat with disabled facilities to help her care for her very weak baby son and keep him free from the infections and germs which could kill him.

But she soon realised there was no hot water coming through any of the taps or the shower, leaving her unable to give J’ssiah the two baths a day he needs.

She reported it to Wandle Housing Association, but nine long months later, the problem had still not been fixed.

In desperation Jeanene, 29, has been making the daily round trip to her mum’s place in Croydon just to make sure J’ssiah and her other two children are kept clean. But doctors have advised her that taking J’ssiah, who has no functioning immune system, back and forth as the weather turns colder is likely to cause him to develop a potentially fatal illness.

J’ssiah receiving treatment in hospital before the bone marrow transplant from brother, Kye

“If J’ssiah catches a cold I’ve got to rush him to hospital. He can’t adapt to temperatures the way we do. He can’t be in and out of the cold like this.”

“I’ve got a really sick son and I don’t even have hot water. It’s absolutely crazy,” she said. “[Wandle] is putting me in a situation where I’m actually risking his life. Not having hot water could actually kill my son.”

The day after the News contacted Wandle, an engineer replaced the taps at Jeanene’s home. As we went to press, there was finally hot water coming from the bathroom and kitchen taps, though the shower was still to be fixed.

After several previous unsuccessful attempts to fix the problem, Jeanene is not convinced the issue is resolved, but says if she were to have hot water it would be “like a Godsend.”

“We’ve got all these people who want to help because they don’t know how long J’ssiah’s going to be here but what we really need is just hot water in our home. That would be amazing.”

A Wandle spokesperson said their engineers had been out to fix the issues with the hot water supply on a number of occasions, but the problem kept reoccurring.

After carrying out work to the property this week, they claim the problem is now fixed once and for all. “We regret that it has taken some time to identify but the issue is now resolved. Our priority has always been, and will continue to be, the health and wellbeing Mrs Fraser’s family, and ensuring their home meets their needs,” said the spokesperson.

Since J’ssiah relapsed, Jeanene has been fundraising to get her “cheeky little boy” the pioneering proton beam therapy overseas which could save his life.

The treatment, the doctor’s fees and the travel would cost £150,000 and the family has so far raised just over £22,000 towards their target.

“I’m not going to let anything to happen to him. I’m going to get him the help he needs,” said Jeanene, whose heart has broken watching her son suffer for the last two years.

After her eight-year-old son Kye bravely donated his bone marrow last year, J’ssiah’s body reacted badly to the transplant, his organs collapsed and he was in a coma for three months.

After that his skin flared up and changed colour and he couldn’t swallow properly. “When I think about everything he’s been through, I start having a nervous breakdown,” said Jeanene.

“They kept saying he’s not going to make it but he pulled through,” she added. “They thought it was a miracle because they didn’t think he would survive.”

J’ssiah was given months to live by doctors in the UK, who cannot give the poorly little boy any further chemotherapy, as his body will not be able to cope with the toxins.