Tesco has thanked quick-acting firefighters, while the alleged arson attackers have not yet been arrested 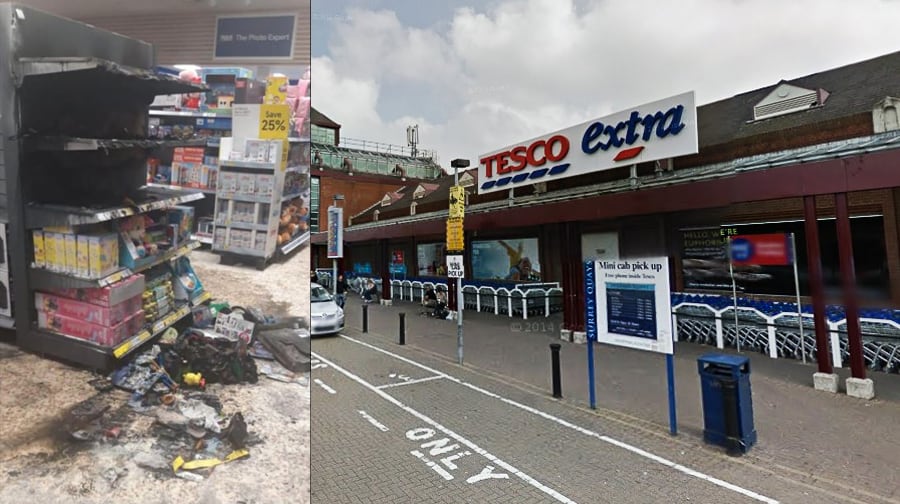 The aisle was seriously damaged in the suspected arson attack

Police say they are investigating an apparent arson attack in which three teenage boys are said to have set the toy aisle in Surrey Quays Tesco ablaze.

The boys, believed by officers to be in their mid-teens, reportedly sprayed a substance on the aisle and set it on fire at around 11.30pm late Saturday night.

The substance has been named by shoppers at the Redriff Road store as WD-40.

Pictures taken from the scene show the ruined wreckage of shelves while burned products lay littered on the floor.

The Fire Brigade rushed to the scene, which caused the shop to be evacuated, and got the fire under control at around midnight.

There were no reports of any injuries, and as yet no-one has been arrested.

The supermarket giant told the News that it was grateful to firefighters for their quick response.

“We are very grateful to the firefighters who quickly put out the fire on Saturday night,” said the spokesman.

“We are now supporting the police with their investigations. The Surrey Quays Extra store is open and serving customers as normal.”

The area in which the blaze was allegedly started has been cordoned off.

“We were called to a fire at a shop on Redriff Road at 11.43pm on Saturday 5th,” said a Brigade spokeswoman.

Witnesses have been urged by police to contact 101, quoting reference 2435/Oct 07 with information.