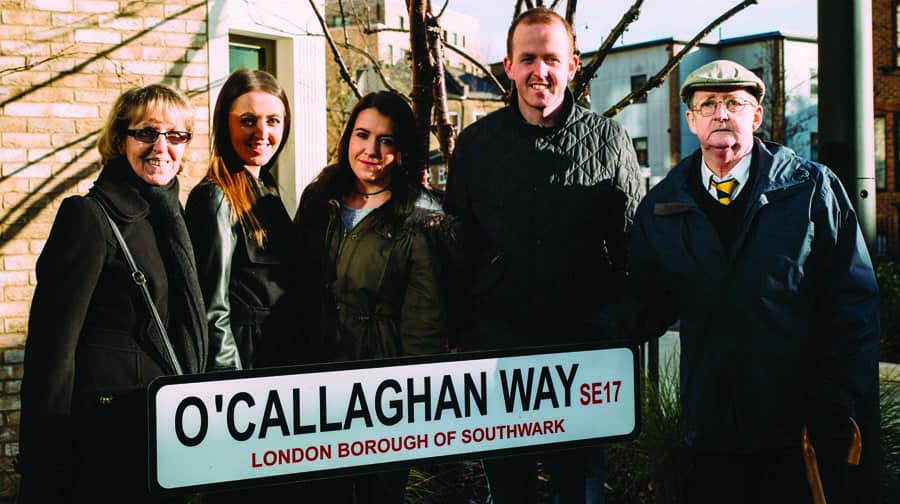 Lee’s parents Shirley and Eugene, with his family and the street sign

A street named after a Walworth-born soldier who was killed in Iraq was officially opened last weekend, writes Chloe Livadeas…

Private Lee O’Callaghan was fatally shot in August 2004 while serving in Basra. He was just 20-years-old. To honour Lee’s memory, a street in the Elephant Park development has been named O’Callaghan Way, just round the corner from where Lee’s mother and brother work.

The Mayor of Southwark, Charlie Smith, cut the ribbon to the road last Saturday alongside Lee’s mother, Shirley. Speaking at the event, the Mayor said that the street sign would “stand as testament to a young man who gave his life for this country. A very brave young man, a local man”.

He went on to say: “It’s a grand, grand event and I’m pleased to be here to represent Southwark Council and all the people of Southwark who will remember this day and remember this road for a long, long time.”

The Millwall fan had been on duty for five months and was due to fly home to spend time with his family just one week before he died. He was the 62nd British Soldier to be killed in the Iraq war and the fourteenth to die after the war was declared over.

O’Callaghan Way runs close to where Lee grew up on the Heygate Estate. His friends and family hope the community will continue to remember him for generations to come.

Lee’s mother, Shirley, said: “It’s a great honour for us to have the signs there, his friends campaigned for the sign for a long time and it’s finally gone through. It’s been special to see the sign actually up.”

Shirley said there were “lots of local people there from around the community and the army” as well as “lots of friends and family and some Pearly Kings and Queen”.

Lee’s name was put forward among 130 suggestions from locals to name new streets in the area.