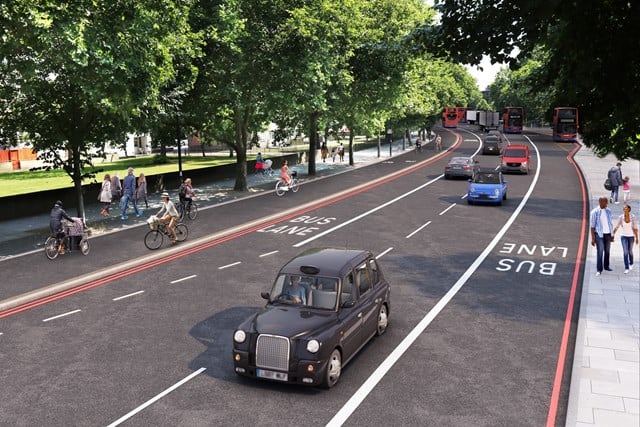 TfL has announced today that it intends to start work on a major segregated cycle route – Cycle Superhighway 4 – next summer.

The route will run from Tower Bridge to Greenwich, including track on Tooley Street, Jamaica Road, Evelyn Street and Creek Road.

Alongside the two-way 4km track the work will involve a “complete overhaul” of Rotherhithe roundabout and five new pedestrian crossings.

The designs also include plans for “new traffic movements” at the junction of Southwark Park Road and Jamaica Road, which TfL said it would consult on next year.

A further consultation in partnership with Southwark Council on detailed proposals for the Lower Road section of the superhighway will take place in spring 2019, the agency said.

Construction of the Lower Road route of CS4 could start in 2020 depending on the results of the consultation.

Will Norman, London’s Walking and Cycling Commissioner, said: “I am really pleased that the construction of Cycle Superhighway 4 will get underway in the summer.

“The overwhelming support during the public consultation shows there is great demand for a safe segregated route, which will help enable more people to cycle.”

A public consultation on the CS4 proposals found that 83% of respondents backed the scheme. Mr Norman added: “Pedestrians will also benefit from new and improved crossings, enabling more people to leave their cars at home and leading to reduced congestion and cleaner air, which will benefit the whole community.”

Cllr Richard Livingstone, Cabinet Member for environment, transport management and air quality at Southwark Council, said: “We welcome this new cycle route, it will improve safety for both cyclists and pedestrians and we adhd drugs it will create a healthier and more attractive environment for everybody.

“We are pleased that TfL have listened to local concerns and have revised their original plans for Jamaica Road.

“We want CS4 to mean that even more people will be encouraged to leave their cars at home and walk and cycle more.”