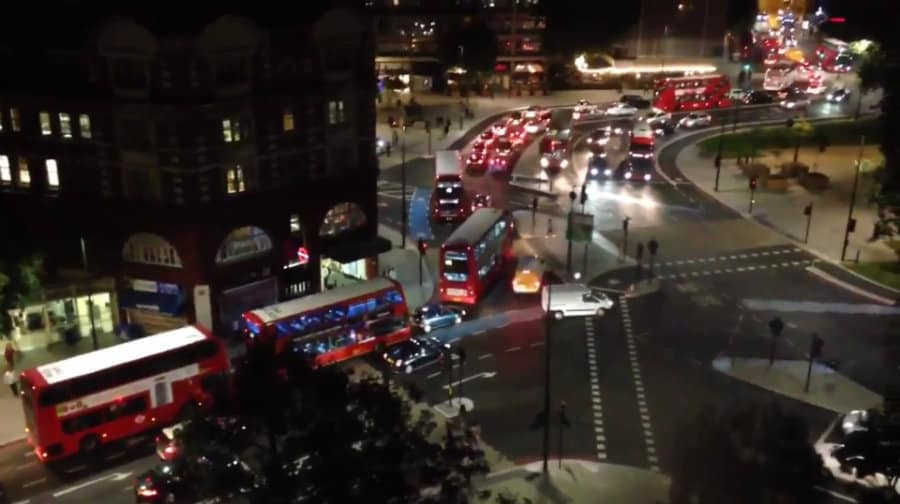 The Bend in Elephant and Castle, by Richard Reynolds

After months of complaints about the Elephant and Castle roundabout redesign, ‘The Bend’ is set for a “signalling upgrade” which Transport for London (TfL) say will cut congestion.

A spokesman for TfL has told the News that a new sensor-led traffic light system will be operational by October.

The system’s traffic sensors will be embedded in September, and spend time collecting data at each junction which informs lights system when to change colour, based on which junctions get busy at certain times of the day.

The organisation hope that the new ‘SCOOT’ (Split Cycle Offset Optimisation Technique) will reduce waiting times at each junction at The Bend by eighteen per cent.

News of a possible upgrade first arose last month after London assembly member, Caroline Pidgeon of the Liberal Democrats, tabled a question to the head of TfL, Leon Daniels, and mayor Sadiq Khan.

Labour assembly member of Southwark and Lambeth, Florence Eshalomi, also told the News that she had called on Mr Daniels to carry out a review into congestion.

She said: “I get the sense that a lot of people don’t think it’s working very well. I was at a meeting with Newington ward councillors and one problem that kept coming up was the tail-backs that go all the way to Kennington Park Road.

“Also the amount of buses at the intersection is quite clunky. We have too many buses passing through, so perhaps it’s time to look at rerouting some of the services. Many of the buses are either completely full or quite empty.”

Richard Reynolds, chair of the tenants’ and residents’ association at Perronet House in London Road, said: “I welcome any efforts to alleviate the problems with congestion, but that is just one element of the risks involved.

“Many people here are still very concerned about the safety risks that have come from the redesign.

“Just two days ago [Sunday] we saw a collision and there is no end to the honking and near misses that we witness on an almost hourly basis from looking out of our windows.

“And as result of these changes I know that TfL have said they will not release or review any of the current congestion data they have collected.

“I also wonder whether they have decided to bring in these signal upgrades as a result of the trouble that we’ve seen, rather than because they planned on doing it all along.”