The proposals would see a 70m block built over the station, but also would unlock new council homes 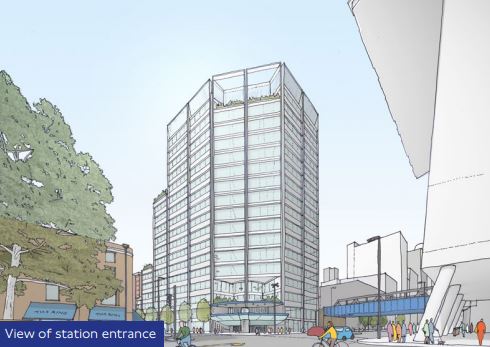 The proposed view from the station entrance under the TfL plans

TfL has opened a public consultation into plans that would see the transformation of the area above Southwark tube station, including a 70 metre-high office block.

The scheme would also see the development of more than twenty council homes at nearby Styles House as part of a land swap agreed in outline by the council earlier this year.

“Our plans offer the opportunity to create a new sustainable landmark for Southwark and a focal point for the community, which will help it be recognised as a vibrant and attractive destination in the capital,” said TfL’s Graeme Craig. Mr Craig added: “Reflecting the entrepreneurial spirit of the surrounding area, we are providing retail and commercial opportunities, while also delivering improvements for the local community, making the space greener and more accessible.”

The development will keep the current station entrance, ticket hall and lightwells down to the Jubilee line platforms.

The plans are open to consultation from local residents on the TfL website until November 26.

The council “has worked closely with TfL to ensure that any development around Southwark Tube station enables the neighbouring residents at Styles House to shape their evolution of their estate and design new council homes on the adjacent site,” said Cllr Leo Pollak, who holds the ‘new homes’ portfolio.

The plans come after neighbouring Lambeth Council gave the go-ahead for a second entrance to the station on Greet Street, despite concerns it would disrupt the quiet residential area.