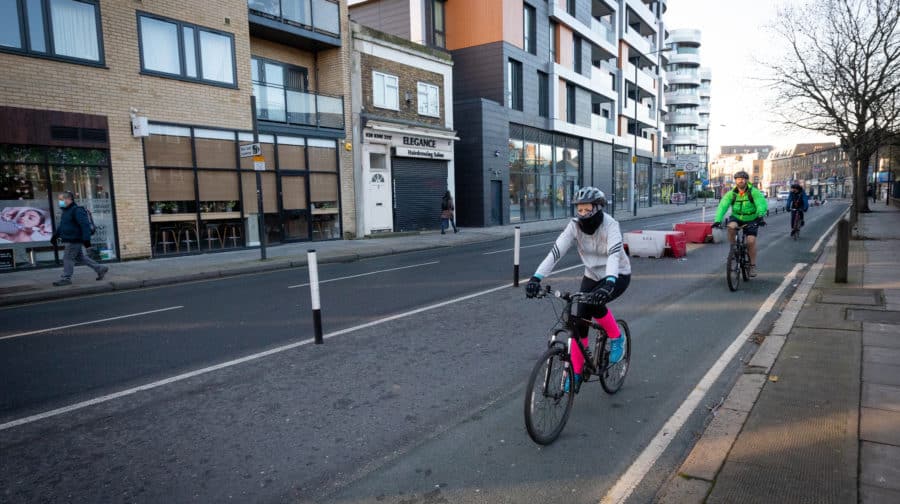 Cyclists use the trial Cycleway 4 in Greenwich on the A206.

Transport for London has unveiled plans to improve the A23 and CS7 cycle routes to make cycling in Southwark and Lambeth safer and easier, writes Simon Throssell…

From March, changes will be made to the bus lanes along the A23 between Oval and Streatham to give people the confidence that they can travel safely along busy roads.

Lanes will be widened at stops to make it easier to pass stationary buses, and continue to enable essential cycle journeys at all times.

There will be new restrictions on a limited number of left turns for motor vehicles along the corridor to reduce conflict with people cycling.

Separate traffic signals will also be created at key junctions in Brixton to give cyclists an earlier green light, as well as larger advanced stop lines at other busy junctions.

Further upgrades will also be made to the CS7 speedway, one of the most cycled routes across the capital. Improvements to the 13km route were made earlier in the pandemic with these new changes including:

These measures are part of TfL’s ongoing response to the increased levels of cycling during the pandemic. According to recent data, cycling in inner London has increased by 7% and by 22% in outer London compared to spring 2019.

Helen Cansick, TfL’s Head of Healthy Streets Delivery, said: “I hope that these trial changes to roads in Lambeth and Southwark will make a noticeable difference to cycle journeys on two of the area’s busiest corridors and give people new to cycling confidence that it is a safe and viable way to make essential journeys during the pandemic.

“We’d really like to hear people’s thoughts on our plans and will continue to work with both councils and people in the area through the trial period.”

Cllr Catherine Rose, cabinet member for leisure, climate emergency and roads at Southwark Council, said: “We welcome the addition of a safer cycleway to support cyclists’ journeys to Elephant and Castle.

“We have long been supporting TfL in making this key south London destination friendlier and safer for pedestrians and cyclists.

“Southwark?Council is committed to helping people to upgrade to cycling and walking, modes of transport proven to improve personal health and happiness, as well as supporting better air quality and road safety for all.”

Residents are being encouraged to share their feedback via TfL’s website before a more extensive engagement process begins.

All causing more pollution . Millions travel every day by bus , far far more than cyclists , and our journeys are now much longer due to all of this for a minority of road users .